SportsMourinho criticizes the referee and "VAR" after losing the derby
Sports 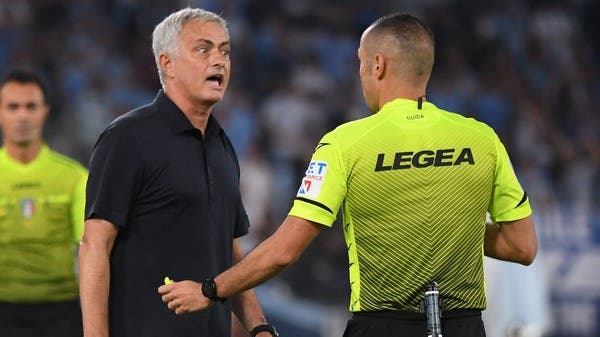 Roma coach Jose Mourinho criticized the referee as well as the video assistant referee after the 3-2 loss to Lazio in the capital’s Serie A summit on Sunday, and said his team dominated the match despite the final result.

This is the second defeat for the Portuguese coach since he took charge of Roma this summer, and Lazio advanced from the tenth minute until the final whistle.

Mourinho was not happy with a possible mistake in building up Lazio’s second goal, which was scored by former Roma player Pedro after 19 minutes, and feels that his opponent Lucas Leiva should have received a second yellow card when comparing the incident to the sending off of Roma captain Lorenzo Pellegrini against Udinese last Thursday.

“Italian football has developed a lot, but unfortunately the referee and the video assistant referee were not at the level required for this wonderful match,” Mourinho told DAZN.

“In a 2-0 goal, it could have become 1-1. The referee and VAR made a mistake, and that’s too much. The second yellow card was also missing from Leva in an impressive decision. This was the same situation as Pellegrini when he received a red card, but today nothing happened.” .

“We were the best party on the field. Of course, when we conceded three goals, it means something was wrong, but the second and third goals came from two counter-attacks.”

“We tried and controlled, did our best and put Lazio in a difficult situation,” Mourinho continued. Roma occupies fourth place in the Italian league, and will play in the next round with Empoli.

Previous article“Freedom and Change” in Sudan: We stand against any coup attempt
Next articleSudan’s Prime Minister: The current conflict is not between military and civilians