Mourinho returns to his hobby by blaming the players 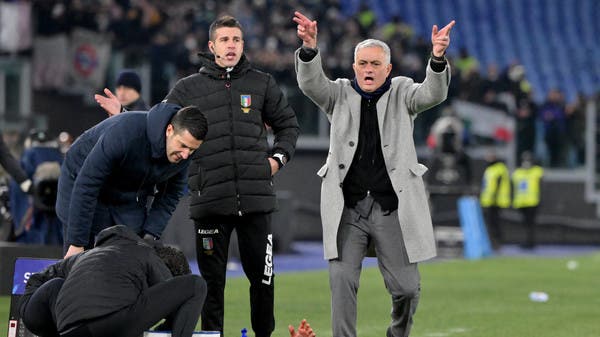 When Jose Mourinho returned to Italy to lead Roma, he was keen to stress that he needed time to change the fate of the capital’s club, but the initial indications were not good and the players did not live up to his requirements again.

Blaming players for his team’s failures is not new behavior for the moody Portuguese coach who has publicly criticized his players during his experiences at Manchester United and Tottenham Hotspur.

During his short period in Rome, Mourinho did not stop criticizing his current squad, especially when the humiliating 6-1 loss to Norway’s Glimt in the European Conference League last October.

The atmosphere has changed dramatically after his best performance under him came in the 4-1 win over Atalanta before the winter break, and the coach insisted the win could be a turning point in his side’s volatile season.

It was the perfect opportunity to make a good impression when facing AC Milan and Juventus in the four days following the Christmas holidays, and in terms of performance, Roma showed promising signs.

But injury-plagued Milan capitalized on blunders to win 3-1 at the San Siro on Thursday before Juventus came from 3-1 down to win 4-3 in the space of 20 minutes on Sunday, leaving Mourinho on edge.

Mourinho told the “Dazon” platform: “At the end of the day, when you’re in the mud, you stick your feet and look for your prestige, but in the dressing room there are very gentle people. Playing in the safe zone and being in the sixth or seventh place is very easy for some characters and we need to get rid of this mentality.

He added, “After the Milan match, I told the players that they are the ones who should approach me, and I am not the one who should resemble them in the psychological aspect.” I do not want it.

Roma have been a regular in the Champions League in recent years but have not finished Serie A in the top four since 2017-2018.

Roma called up a big name like Mourinho to change the situation, but after the two losses, he became nine points away from fourth-placed Atlanta and played a game more.

Mourinho stressed his need to spend more on the team for further development, and his current squad hopes that the new arrivals will be able to leave an immediate imprint so that the coach will stop disturbing them.