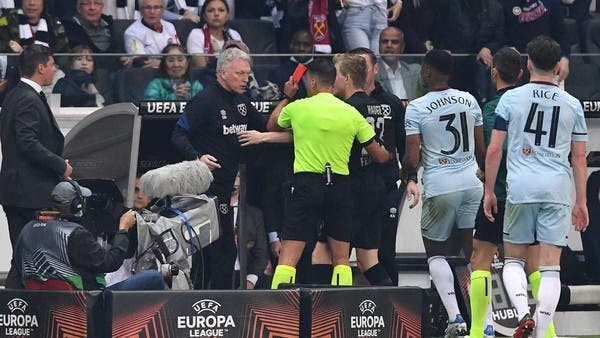 West Ham United coach David Moyes has apologized after he was sent off for kicking a ball at a ball boy during his team’s European League semi-final second leg loss to Eintracht Frankfurt last night.

With 12 minutes left, Moyes angrily kicked the ball towards the ball boy who I think is wasting time during the loss of ten West Ham players 1-0 in the semi-final second leg in Germany and 3-1 on the aggregate score.

Moyes told reporters: “I should apologize for kicking the ball, but the boy sent it to me short.” I kicked the ball towards the boy so I apologize for that. But he threw it too short towards me.

Moyes also criticized the German team’s coaching staff for urging the referee to send off Aaron Cresswell, who was initially booked in the 19th minute after an interference against Jens Peter Haug, but was sent off after a VAR review.

Moyes added: “I think the refereeing was not successful, but I also think that Aaron gave the referee the opportunity to make that decision.” I was even more disappointed with the coaching staff of Eintracht Frankfurt. You don’t have to react this way.

West Ham, who are seventh in the Premier League, will face Norwich City, who have already been relegated, next Sunday.