MPs must protect the dignity of parliament: President insists 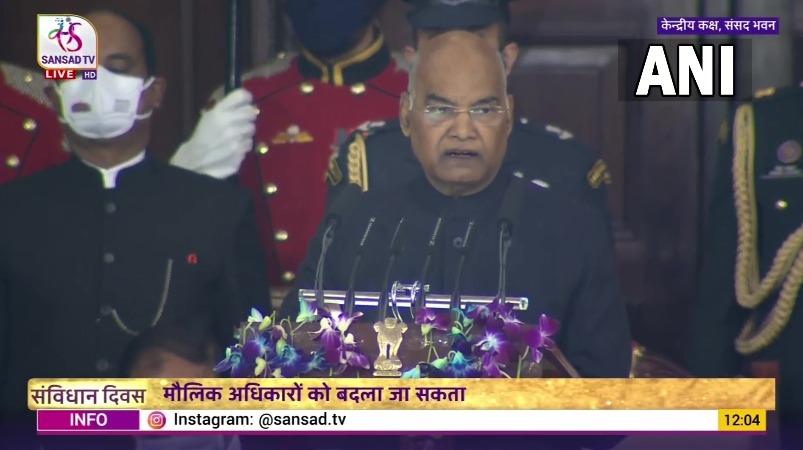 That all members of parliament, whether ruling or opposition, must protect the dignity of parliament President of the Republic Ramnath Govind Said.

Today at the Constitution Day celebrations organized by the Parliamentary Committee of India in the Central Hall of Parliament President of the Republic Ramnath Govind Addressed. Then he said:

Ours Parliament Is at the peak of the Indian democratic system. Moreover, all the MPs gather here to pass laws and discuss issues related to the public interest. In fact, the elected representatives of the village council, the canopy council and the parliament should have the same priority.

That individual priority lies in working for the benefit of all the people in their constituencies and for the good of the nation. There may be differences of opinion, but there should be no differences that interfere with the true purpose of public service.

It is normal for members of the ruling party and the opposition to compete. But this competition must be about being the best representatives and doing the best things for the public good. Only then will it be considered a healthy competition. Competition in parliament should not change drastically.

In his speech, the President said that the opposition is really the most important element of democracy. Without a competent opposition, democracy will fail. The government and the opposition are expected to continue to work together for the benefit of the citizens, despite their differences.

Moreover, the framers of our Constitution have enacted legislation in advance of this. It is also necessary to build the nation.

If members of parliament see their responsibility as an extension of the freedom struggle ambitions, they will focus on their duty to strengthen the legacy of those who drafted the constitution.

If they realize that they are sitting where the framers of our Constitution are today, they will naturally feel their deep history and sense of duty.

We have recently observed the 150th birthday celebrations of the Father of the Nation Mahatma Gandhi. We are now celebrating the 75th anniversary of our independence.

It is clear that ordinary citizens were able to breathe the air of freedom through their sacrifices through the deep respect they give to their heartfelt known and unknown freedom fighters. The commemoration of such historic events is an occasion to commemorate the values ​​fought by our freedom fighters.

These values ​​of justice, liberty, equality and fraternity are enshrined in the preamble of our Constitution. We must all dedicate ourselves to pursuing those great national ambitions in our daily lives. By pursuing these ambitions, we will further elevate our status on the world stage and be ready to face any challenge effectively.