“Muammar” writes down Messi’s goals throughout his history by hand 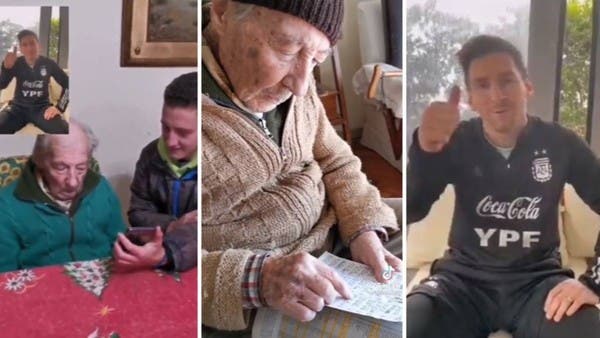 
100-year-old Hernan Mastrangelo became the talk of the hour in Argentina after his grandson Julian revealed to the media that his grandfather had documented all of Barcelona’s Lionel Messi’s goals in handwriting in a notebook for many years.

Mastrangelo’s hobby, who works in the chocolate industry, has attracted the attention of the media and the Argentine star himself.

Messi, who recently celebrated winning the Copa America soccer tournament with Argentina, recorded a video and sent it to Mastrangelo with a thank you message.

Mastrangelo told Reuters: “I wanted to document all the goals that Messi scored. I followed it with passion. I watch all the matches and if I don’t get a chance to watch any match, I know the result from my grandson.”

Mastrangelo does not like to use mobile phones and computers and has been recording Messi’s goals by hand, writing the date of the match and the name of the opposing team to document more than 700 goals scored by Messi during his career.

When Messi learned about this story during his participation in the Copa America, Hernan’s grandson received a phone call from a relative of the Argentine star, thanking him and sending him the video.

In the video, Messi said: Hi Hernan, I heard your story. I can’t believe you scored my goals this way, I didn’t even keep my goal record like you did, so I wanted to send you a big hug and thank you for what you’re doing, see you later and bye.

Mastrangelo was overwhelmed with feelings when he received the video while sitting in his home in the outskirts of Buenos Aires, and said: I don’t think Messi said this to a lot of people.

In the Moscow suburbs, the mock enemy was destroyed using a “tank carousel”

Willie Colón is stable in New York after a traffic accident

Surekha Vani: You are behind my success .. I will love you forever! Surekhavani emotional comments with his photo

Prices for trips to Turkey fell to 22 thousand rubles

WhatsApp brings you a surprise about deleting messages