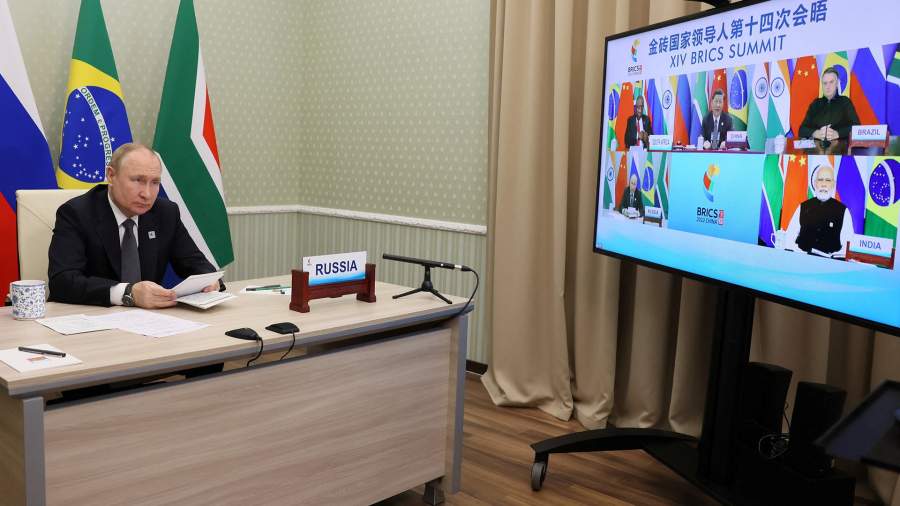 When developing a course for the formation of a truly multipolar system of interstate relations based on the norms of international law, the leadership of the BRICS countries will be in demand more than ever. Vladimir Putin is sure of this, who on June 23 took part in the summit of the association, which today includes Brazil, India, China, the Russian Federation and South Africa. According to the Russian president, only together can we respond to such threats as terrorism or organized crime. Commitment to multipolar politics is not alien to other BRICS countries whose leaders spoke on this day. According to experts interviewed by Izvestia, in order to create a new, more equitable system of international relations, the Five are facing difficult tasks – in particular, we are talking about the formation of an independent banking system and increasing the share of cross-border trade in the national currency.

From climate to Ukraine

The 14th BRICS summit this time was held under the Chinese chairmanship via videoconference. The refusal to meet in person in the capital of China or another Chinese metropolis, apparently, is still associated with the coronavirus threat. Despite the fact that in many countries of the world, including Russia, attention to COVID-19 is gradually fading, Beijing still adheres to a “zero tolerance” policy for the virus, which provides for strict measures to eradicate the infection. Of course, such an approach does not fit well with the organization of such mass events, in which a large number of journalists and members of delegations are involved, capable of bringing a dangerous disease “with them.”

The very holding of the online summit once again confirmed that new technologies are not yet ready to completely replace the good old diplomacy based on personal contacts between the leaders of countries. First, the video link with South African President Cyril Ramaphosa was lost, then technical problems overtook the Indian Prime Minister – as soon as Narendra Modi began his speech, colleagues warned him with gestures that there was no sound.

As for the statements of the heads of state, their leitmotif was the rejection of the unipolar world that emerged after the collapse of the USSR and was associated with the complete dominance of the United States in the international arena. Chinese President Xi Jinping, for example, said that countries should first of all abandon the Cold War mentality and confrontation between blocs. In addition, the Celestial Empire opposes unilateral sanctions.

“We are convinced that now more than ever, the leadership of the BRICS countries in developing a unifying, positive course towards the formation of a truly multipolar system of interstate relations based on universally recognized norms of international law and the key principles of the UN Charter is in demand,” added Vladimir Putin, who announced the constant growth of authority and influence of BRICS in the world.

In his opinion, only together it is possible to solve such problems as conflict resolution, the fight against terrorism and organized crime, as well as counter climate change and the spread of dangerous infections.

– And of course, only on the basis of honest and mutually beneficial cooperation can we look for ways out of the crisis situation that has developed in the world economy due to the ill-conceived, selfish actions of individual states, which, using financial mechanisms, in fact, spread their own mistakes to the whole world in macroeconomic policy,” Vladimir Putin said.

The presidents of South Africa and Brazil tried to avoid any negative statements about Washington and its closest partners in their speeches. However, from Jair Bolsonaro, who was nicknamed “tropical Trump” for the similarity of his views with the American ex-president, no one expected this. For Brazil, even after Democrat Joe Biden came to power, Washington remains an important partner, including on the economic track.

Jair Bolsonaro called for the reform of international organizations, including the World Bank and the International Monetary Fund. In addition, he spoke for the restructuring of the work of the UN Security Council to enhance the role of developing countries in this structure. The increase in the weight of such states in the international arena is also supported by the leadership of South Africa. According to Cyril Ramaphosa, developing countries, the core of which is the BRICS, should increase cooperation in the current conditions. This, he says, is important for fighting poverty and mitigating the effects of climate change.

Of course, the leaders did not bypass sensitive political issues, including the situation in Ukraine. This issue, however, was discussed in the closed part of the event. At the same time, the Beijing Declaration, which recorded the main results of the last summit, in fact, says only that the BRICS countries support the negotiation process between Moscow and Kyiv.

BRICS is increasingly asserting itself as a global platform of the “collective East” and “collective South,” said Elena Panina, director of the RUSSTRAT Institute, in an interview with Izvestia. According to her, now more than 3 billion people live in the countries of this association and a quarter of the world GDP is formed. At the same time, according to analysts’ forecasts, the twenties of this century may become a time for a change in the global economic leader. If by 2020 the share of the BRICS countries in world trade was almost 20%, then by 2030 it could reach 37%, overtaking the combined indicators of the US and the European Union, Elena Panina added.

One of the main issues currently being discussed within the BRICS is the creation of an international reserve currency based on the basket of currencies of the five states.

“Right now, in a situation where the actions of the United States, which encroached on Russian foreign exchange reserves, have undermined the world’s confidence in the dollar, the BRICS countries can make fundamental decisions that will be able to change the entire system of global finance in the medium term,” Elena Panina believes.

Despite not too high parameters of per capita consumption, in the general population of the “five” countries is a huge and capacious market that makes BRICS self-sufficient in the financial and economic aspect, she is sure.

“However, it is important to form not only an independent system for the exchange of interbank information, but also to increase the share of cross-border trade between countries in the national currency, which will increase the weight of national currencies and bring some currencies to the rank of reserve ones. For example, the yuan, which already today has a share of cross-border settlements of about 50% of the total volume of cross-border settlements in China, Vladimir Stroev, rector of the State University of Management, explained to Izvestia.

The BRICS association was created for the sake of the emergence of an alternative economic development model, but significant changes have not yet been achieved – largely due to uncoordinated actions and state interests of the participating countries, the expert recalled.

— The entry of the Chinese yuan into the basket of reserve currencies as a result of the global financial crisis of 2008-2009 can be considered as an achievement of the unification, — he specified.

The inconsistency of actions is manifested by partial support for anti-Russian sanctions by some organizations and institutions operating on the territory of the BRICS or created under the auspices of the association. In particular, the New Development Bank (NDB) has suspended new transactions in Russia, and the Chinese company Huawei is gradually leaving Russia, the rector of the State University of Management noted.

The formation of new approaches to the exchange of information in the banking sector, which is independent of European and American decisions, will reduce the risks of currency crises and weaken the political influence on the economies of countries that do not belong to the world economic elite, Vladimir Stroev believes. Recall that on June 22, Vladimir Putin, in his greeting to the participants of the BRICS business forum, invited countries to join the Russian payment system MIR.