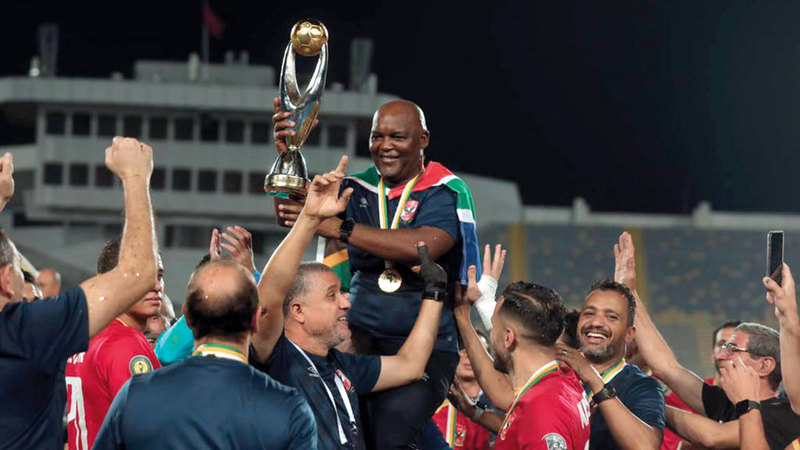 
The most optimistic was not expecting the technical renaissance conducted by South African coach Pitso Mosimane on Al-Ahly of Egypt since his contract with him on October 1, 2020, by achieving all possible tournaments with the “Red Devils” so far, most notably achieving third place in the Club World Cup and crowning the Champions League title. Africa for the second time in a row and the tenth in the history of the ancient club after a broad victory over South Africa’s Kaiser Chavez 3-0, the day before yesterday, in the final match, to reduce the difference to three titles behind Real Madrid, the most crowned continental championship in the world.

The Spanish club has 26 continental titles, followed by Al-Ahly with 23 titles, then Argentine Boca Juniors and Italian Milan, each with 18 titles. Africa, seven in the African Super, and won one title of the Afro-Asian Championship.

Mosimane turned into a true legend in South Africa after adding his third individual title to the continental championship (twice with Al-Ahly and one with his former team Sun Downs), which prompted fans on social media to demand international clubs in the five major European leagues to sign him, given that he enjoys the technical specifications. High in terms of football realism and his ability to change and control the keys to play against the strongest opponents and to read the correct matches, some even considered him better than the famous Spanish coach Pep Guardiola during the recent period!

Musimani became the second coach in Al-Ahly’s history to win the Champions League title in two consecutive editions after the Portuguese Manuel Jose, who was crowned in the 2005 and 2006 editions, to turn into a situation worth stopping in front of, and wondering whether he could take over the training of a team classified in the five major European championships, according to the nominations of fans in his country .

The fan, who bears the name “Sacrifice”, says on Twitter: “I tell you that Pitso Musimani will become the first African coach in England,” while “Oelani” commented: “Mosimani is better than Guardiola and Zidane, Al-Ahly is chasing Real Madrid,” noting that Al-Ahly is three titles away from Real Madrid, which is the most crowned in its continent with the European Champions League title with 26 continental championships (13 European Champions League).

As for the fan “Lwinga”, he said: “Pitso Mosimane is one of the three best coaches in the world, what he did with Al-Ahly is absolute madness, it is domination, he has frustrated Africa, he completely controls South Africa and how he does the same in Egypt.”

Fans circulated a video of coach Musimani wearing the South African flag, raising the most expensive cup in the continent at the club level, while his pictures covered large areas of communication sites that praised his achievement with Al-Ahly, expecting him to continue his harvest of championships and decorate the coffers of the Red Castle with them .. Will Musimani continue in Catching trophies, or will he undertake a training mission in Europe – as the African public expects – after his contract with Al-Ahly expires in the summer of 2022?

• Tweeters nominate Mosimane to train in England. They see him as one of the 3 best coaches in the world.

Clubs with the most continental titles in the world:

Sudan: The army will remain in Al-Fashqa to protect the borders and the people

Perez attacks Real Madrid legend, describing him as a “dog”

The national labeling system will be merged with the EGAIS