Muslim minister who entered Vishnu temple in Bihar – defied the ban and went up to sanctum sanctorum, case in court 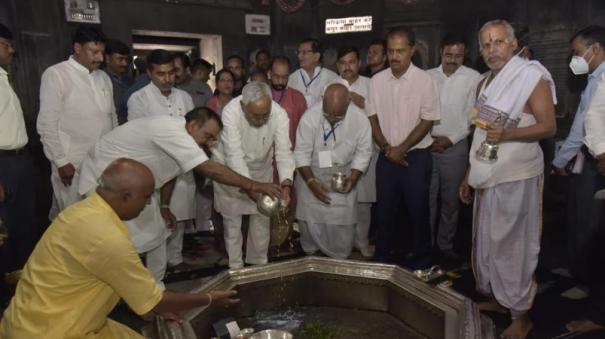 New Delhi: Buddha attained enlightenment under the Bodhi tree at Buddha Gaya in Bihar. The Buddha temple here is internationally famous. Meanwhile, there is also a Hindu temple called Vishnu Badam near it.

Other than Hindus are not allowed in this temple. A notice board for this is also placed outside the temple. The temple administration was displeased that Minister Mansoori had built the sanctum sanctorum of the temple regardless of this. Then they cleaned the sanctum sanctifying it.

Meanwhile, Chandra Kishore Parasar, a social worker of nearby Muzaffarpur and a BJP supporter, filed a complaint against Minister Mansoori at the police station. But this complaint was not registered. Subsequently, Chandra Kishore has approached the court requesting to file a complaint against Minister Mansoori. The Muzaffarpur District Court, which accepted his petition, is scheduled to hear it on September 2.

In his petition, Chandra Kishore has demanded action against Minister Mansuri for insulting Hinduism by entering the temple.

Meanwhile, the issue is intensifying as a conflict between BJP and ruling alliance leaders. Comments in this regard are also going viral on social media. BJP MLAs are insisting that Minister Mansoor should be sacked. They are also preparing to hold a protest for this.

Regarding this issue, Bihar BJP MLA Haribhushan Thakur said to ‘Hindu Tamil’ newspaper, “Chief Minister Nitish Kumar knows very well that people of other religions should not enter the Vishnu Padam temple. Despite this, he invited a Muslim minister with him. It is reprehensible. “Mansoori should be sacked immediately in this matter,” he said.

Like the Vishnu Padam Temple of Buddha Gaya, many major legendary temples in northern states have a notice that says ‘Non-Hindus may not enter’. However, like Minister Mansoor, it is customary for politicians and officials to visit the temple for their administrative duties.

In this case, Chief Minister Nitish Kumar has mentioned this and said, “Senior leader of BJP and former Union Minister Shahnawaz Usain has also come inside the temple with me during the coalition government with BJP.”