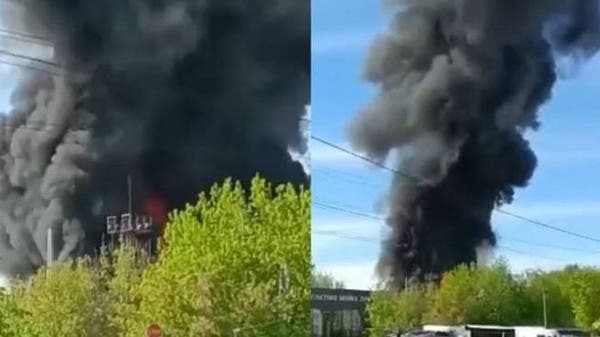 After successive and mysterious fires that struck Russia recently, another fire broke out in a famous aviation institute in the Moscow region, and it is the latest Russian fire that was circulated on social media and published by the American “Newsweek” magazine.

The footage showed smoke billowing into the air above trees at the Central Dynamic Institute (TsAGI) in the suburb of Zhukovsky, about 25 miles southeast of central Moscow.

The Moscow regional branch of the Russian Emergencies Ministry said the fire broke out at a power station on the site at around 9 a.m. local time on Saturday, according to RIA Novosti, and was put out within an hour.

TsAGI was founded in 1918 by Nikolai Zhukovsky, after whom the city is named, and is considered the father of Russian aviation.

The institute has been a government research center since 1994, and its website describes it as the largest scientific research center in the world. The website stated that the center is helping to develop the next generation of jet aircraft such as the new Ilyushin Il-96 and Tu-204.

The cause of the fire was not listed, but it is the latest fire in Russia that has made headlines since the start of the Ukraine war.

This week, Russian authorities dealt with a fire that covered about 22,000 square feet at an industrial site in Berdsk, near Siberia’s largest city, Novosibirsk, about 1,800 miles east of Moscow. Local officials said the fire was caused by polyethylene products on the first floor of the building.

Earlier this month, an explosion at a gunpowder depot of a military unit in the Amur region of the Khabarovsk region killed one person and wounded seven others.

This came just days after it was reported that two people were killed in a massive explosion at an ammunition factory that produces gunpowder in the city of Perm near the Ural Mountains in Russia. Days later, another fire broke out at an aviation college in the same city.

A number of fires have been reported in Russian regions bordering Ukraine that have fueled speculation that they are linked to hostilities due to the war, including several in the Belgorod region.