Nagelsmann: My position and the club’s position on Lewandowski is well known 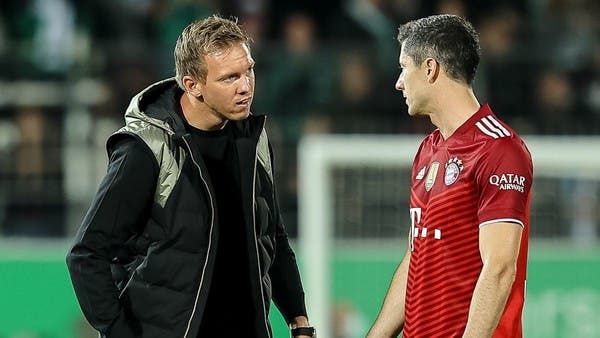 Bayern Munich coach Julian Nagelsmann refused to talk about rumors linking the team’s attacking star Robert Lewandowski to the possibility of moving to Barcelona, ​​stressing that the Polish star is part of his plans as usual, before the conclusion of the German League (Bundesliga) competitions on Saturday.

In his statements to reporters on Friday, Nagelsmann said: The position of the club and my position on Robert is well known, and the status of the contract is known.

He added: I will not comment on all the other topics that were discussed. You can inquire about these things from the player, as well as from (Football Director) Hasan (Salih Hamidic).

Lewandowski, 33, begins the last year of his contract with Bayern Munich, and an agreement has not yet been reached on the renewal.

Nagelsmann said that the player “trained very well” this week and will start as usual in the scheduled match against Wolfsburg in the last 34th stage of the Bundesliga.

He added: It is within my plans just as usual.

Nevertheless, Nagelsmann will miss the services of midfielders Marc Rocca and Corentin Tolisso in the face of Wolfsburg due to illness, and said that defender Josep Stancic could start the match.

Right-back Nassir Mazraoui was close to joining Bayern from Ajax, while Nagelsmann said that the agreement was close to completion.

He added: “We will be happy if we can complete that agreement because he is a really great player. He said in his first interview that he wanted to play at Bayern, and he is very excited to join us.”

Ajax teammate, Ryan Grafenbrech, is a target for Bayern Munich, but Nagelsmann said that a move to sign the 19-year-old is still a long way off.