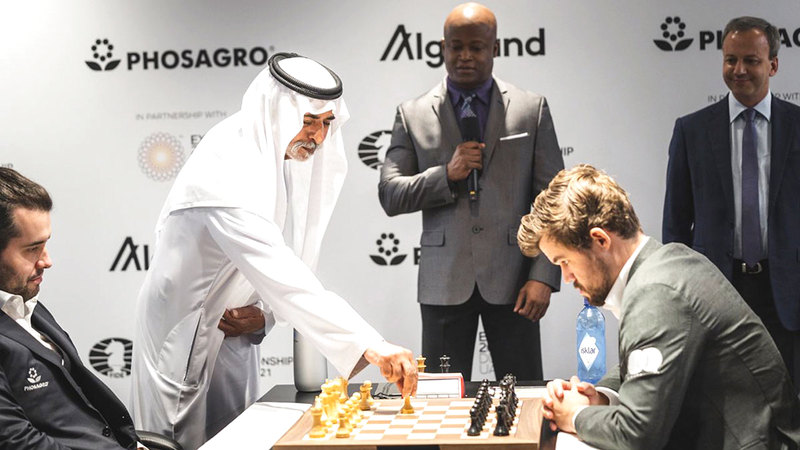 His Highness Sheikh Nahyan bin Mubarak Al Nahyan, Minister of Tolerance and Coexistence, Commissioner-General of Expo 2020 Dubai, launched the day before yesterday, the kick-off of the fifth round of the Individual World Chess Championship, currently being held at Expo 2020 Dubai, and the Norwegian title holder, Magnus, gathered Carlsen, and his Russian challenger, Ian Nepomniacchi.

The round resulted in a tie result for the fifth day in a row, in a confrontation that lasted three hours and 55 minutes, during which the two players were satisfied with 43 moves, which were enough to repeat the exit scenario with half a point due to a tie in this round, bringing both players their score at the end of the five rounds to 2.5 points .

The World Championship, which started last Friday, will continue until the 16th of this month, and will be held in 14 rounds, with a total prize money of two million euros.

The Russian player said in a press statement: “I am generally satisfied with the continuity of the tie, and I think that such games raise the pressure in a chess match for the world title.” He explained, “Of course, the early pressing method was one of the options available, and the playing style was very interesting, but the options became more complex.”

In turn, the Norwegian world champion Magnus Carlsen said: “It is always good to surprise, but unfortunately things did not go well with Nepomniacci, and I actually managed to take advantage of his wrong choices in the advanced stages of the match.” Today, the two players complete the sixth round, after they underwent yesterday’s second day of rest, in an opportunity available to them to review performance with their coaches, and draw plans for confrontations in the crucial upcoming rounds.

• The tie imposes itself between the two international stars, the Norwegian Carlsen and the Russian Nepomniacci.