Napoli passes the Juventus test in his dream of the title 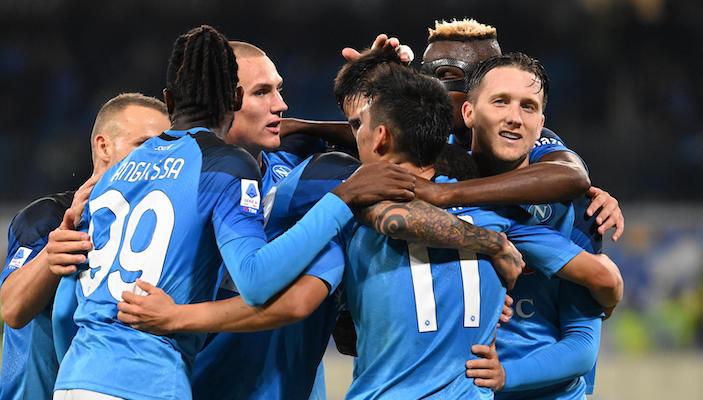 The “leader” Napoli realizes that the upcoming summit against its second-placed guest, Juventus, tomorrow, Friday, in the opening of the 18th stage of the Italian Football League, may be decisive in his dream of a first title since 1990.
In the last stage, the southern club won the title of winter champion, two stages before the half-time competition, after defeating Sampdoria 2-0, recovering from the only loss it suffered this season against its host Inter at the beginning of the new year.
Napoli leads the standings with 44 points, seven points ahead of Juventus and Milan, the defending champions, who will try to take advantage of the summit, whatever the outcome, when they defeat Lecce on Saturday.
Since the start of the system, in which the winner gets three points, starting from the 1994-1995 season, the team that scored the least 44 points after 17 matches went on to crown the title, knowing that this happened on four occasions.
Napoli has been at the forefront since the ninth stage, and was out of the top three only once this season, when it tied with Lecce in the fourth stage, and it was the only time that it wasted points at home.
On Friday, he will play his first home match against Juventus in 2023, knowing that he won nine consecutive victories at the “Diego Armando Maradona” stadium in all competitions.
Napoli dreams of a third title in its history after two, led by the Argentine legend, who named the stadium after his death in 2020, after leading him to his only titles in 1987 and 1990.
Coach Luciano Spalletti’s team is counting on the league’s top scorer, Nigerian Victor Osimhen, who scored 10 goals in just 13 matches this season and scored again in the last match.
For his part, and after a poor start to the season that witnessed only three wins in nine games amid pressure on coach Massimiliano Allegri, Juventus rose up in a miraculous way and achieved eight consecutive victories in the league without conceding any goal (14-0).
With the absence of Serbian top scorer Dusan Vlahovic due to injury, Moise Kean and Czech Arkadiusz Milik filled the void, and the latter will return to face his former team for the first time after playing for him between 2016 and 2022.

Milan to come back and take advantage

This confrontation will be in the interest of Milan, the defending champion, whatever the outcome, provided it wins away from home against Lecce, which is in eleventh place.
The “Rossoneri” suffered a shocking 2-2 draw at the San Siro stadium against Rome last Saturday, after conceding two deadly goals in the last minutes (87 and 90 + 3), after it dominated the course of the match and advanced with two goals a quarter of an hour before the end.
And after only four days, Milan suffered another setback on Wednesday, when it was bid farewell to humble Turin in the Italian Cup final price, after extending it 1-0, conceding the only goal in the 114th minute after a game that dominated its course.
Coach Stefano Pioli said after the loss, “There are difficulties, and there are things we have to improve quickly, because in the league, in the Super Cup and in the Champions League, we will play against high-class opponents, so we must all perform better than that.”
Next Wednesday, Milan will play the Italian Super Cup against its rival and neighbor Inter, the cup champion last season, in the Saudi capital, Riyadh.
Until then, his neighbor, who is three points away from him in fourth place, will seek to keep the pressure on his opponent when he receives Verona on Saturday.
After three consecutive victories in the league, Nerazzurri slipped on the land of Monza in the last stage (2-2), but quickly recovered in the cup and reached the quarter-finals on Tuesday by defeating Parma 2-1.
The competition for European seats is witnessing an intense struggle, as Lazio V, Atlanta VI and Roma V share the same balance with 31 points.
The three teams will go through easy tests on paper on Sunday, as Portuguese coach Jose Mourinho’s team will meet its guest Fiorentina, Lazio with its host Sassuolo, while Atalanta will receive the Salernitana team.