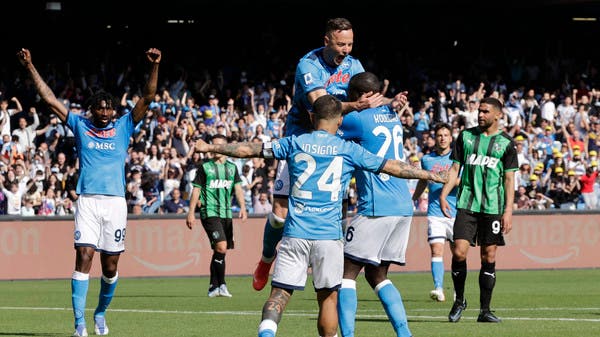 Napoli theoretically guaranteed participation in the Champions League next season, by defeating its guest Sassuolo 6-1 on Saturday in the thirty-fifth stage of the Italian Championship.

And before the end of the league in three stages, the southern team occupies third place with 70 points, 12 points ahead of fifth Roma, which hosts Bologna on Sunday. Even if the capital’s team won its last four matches and Napoli lost all its matches, their two direct matches that ended in a draw and the wide goal difference in favor of the southern team (+36 vs. +15) make it a logical guarantor of at least fourth place.

Senegalese defender Kalidou Coulibaly opened the Napoli goals festival with a header using a corner kick (7). Nigerian Victor Osimhen added in the same way the second goal, before his ball hit the crossbar and wobbled into the net (15). Osimene played the pass towards his Mexican colleague, Hirving Lossano, to score the third goal (19), before veteran Belgian Dries Martins strengthened his team’s lead with the fourth goal two minutes later.

Mertens added his second and fifth personal goal for his team at the beginning of the second half (54), and Kosovar Amir Rahmani concluded the festival in the 80th minute. Sassuolo scored an honorary goal by Frenchman Maxime Lopez three minutes before the end.

In a second match, Cagliari faced the risk of falling to the ranks of second-tier clubs by falling at home to Verona 1-2.

Cagliari occupies 17th place with 28 points, but it is now under threat from Genoa, who will later play the city derby match against Sampdoria, and Lazio will meet later with its host Spezia.