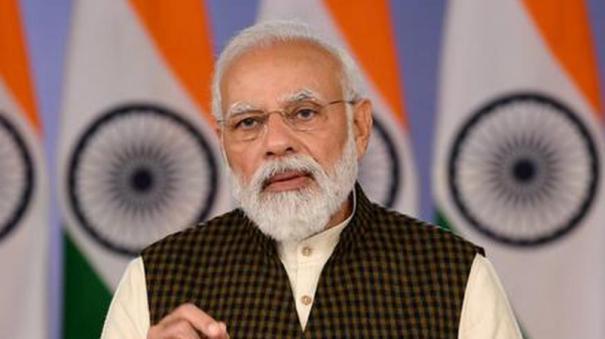 New Delhi: On the occasion of the country’s 75th Independence Day, Prime Minister Narendra Modi has called upon all Indians to post the national flag as their social media cover photo from August 2 to 15.

We are about to complete the 75th year of our country’s independence. On this occasion, I request you to hoist the national flag in every house from 13th to 15th August. All Indians should participate in this movement. From 2nd to 15th August everyone is requested to post national flag in their social media home photos (profiles).

Bingali Venkaiah who designed the national flag was born on 2nd August. I bow and respect him. At this time we are also obliged to remember Madame Gamma. His contribution was important in shaping the national flag.

For the next 25 years, every citizen of the country must fulfill his duties with full dedication. Only then can the dreams of freedom fighters be fulfilled. They can build their dream Bharat.

The fight against Corona is still going on. In this struggle, the Ministry of AYUSH has made an important contribution. Internationally, there is a growing interest in Ayurveda and Indian medicines. International AYUSH Investment and Innovation Conference was held recently. It has attracted investment of up to Rs.10,000 crore.

It is a great honor for India to host the 44th ChessOlympiad in Chennai. I had the opportunity to participate in the opening ceremony of the competition last July 28. On the same day, the Commonwealth Games began in England. Congratulations to all the Indian players who participated. India is delighted to host the FIFA Women’s Under-17 World Cup football tournament. The competition will be held in October. Prime Minister Narendra Modi spoke thus.

Sentence given by Vanchinathan of Tamil Nadu

Prime Minister Narendra Modi spoke on the Voice of Mind programme. If you happen to talk to people from Tamil, you can know about Wanchi Maniachi Railway Junction in Thoothukudi District. The station is named after freedom fighter Vanchinathan. It was at this place that the 25-year-old Wanji was punished for the wrongdoing of the British Collector.

75 railway stations in 24 states have been identified on the occasion of the country’s 75th Independence Day. These 75 stations are decorated very beautifully. Various programs are organized in these.