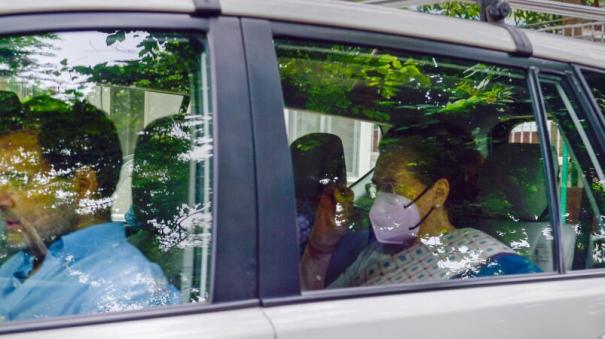 New Delhi: The Enforcement Directorate officials interrogated Congress president Sonia Gandhi in the National Herald case for the third time for 3 hours yesterday. No fresh summons was issued to him.

In the National Herald case, Sonia appeared for the 3rd time yesterday at 11.15 am for the Enforcement Department investigation. Then he was accompanied by Priyanka Vadera and Rahul. He was interrogated for about 3 hours yesterday. Sonia Gandhi has answered around 100 questions in the 3 inquiries so far.

Former Union Minister Anand Sharma said, “Misuse of laws and humiliation of a few people should not happen. The Prevention of Financial Fraud Act is worrisome. This law is being misused,” he said.

Ghulam Nabi Azad said, “Political leaders of the opposite side should not be treated as enemies. Sonia Gandhi’s age and health should be considered before further questioning. He was not well and was admitted to the hospital. He cannot withstand the pressures of the investigating agencies. Even during times of war, it was customary for kings to issue orders not to molest women. He said that the investigating agencies should not be harsh with Sonia Gandhi who is old and suffering from health problems.

Youth Congress workers staged a train strike at Mumbai’s Borivali railway station yesterday to protest against the investigation by the Enforcement Directorate against Sonia Gandhi. At 10.15 am yesterday, they hijacked an express train bound for Gujarat and raised slogans against the central government. They were removed by the railway police.