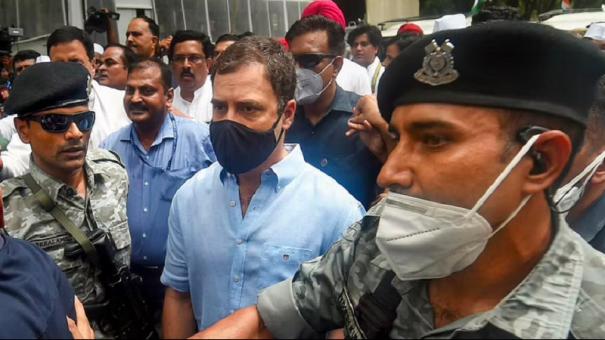 In 2012, senior BJP leader Subramaniam Samy filed a lawsuit alleging fraud in the transfer of shares of the National Herald to Young India. The Enforcement Department, which is probing the money laundering case, has summoned Congress interim president Sonia Gandhi and Congress MP Rahul Gandhi.

Following this, Rahul Gandhi was interrogated for 30 consecutive hours from June 13 to June 15 last week. The Congress party staged a protest against the trial of Rahul Gandhi. In this situation, Rahul Gandhi was exempted from appearing for two days for questioning citing the health of his mother Sonia Gandhi. In this situation, he is appearing for the 4th day today. Rahul’s answers were not satisfactory and it seems that the enforcement officials will continue to investigate him yesterday.

Fighting against the path of fire: Jairam Ramesh, senior leader, general secretary of the Congress and chief spokesman, has said that Congress volunteers across the country will take part in the peaceful struggle against the federal government’s firebrand plan aside. He said a high-level congressional committee would meet with the president this evening to make their demands known.