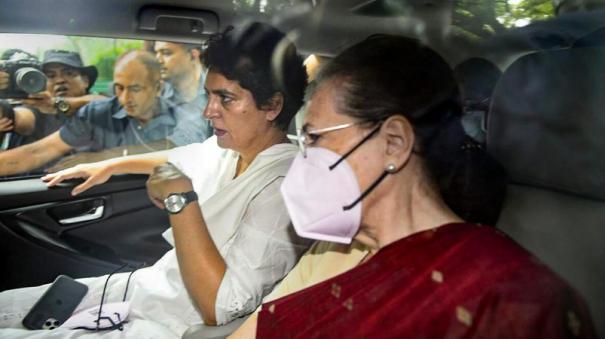 New Delhi: Yesterday, the enforcement department interrogated Congress leader Sonia Gandhi for about 3 hours in connection with the money laundering that took place in the purchase of shares of the National Herald newspaper. Congressmen protested this across the country yesterday.

National Herald was launched in 1937 by Jawaharlal Nehru, the country’s first Prime Minister, with 5,000 freedom fighters as partners. This journal was run by Associated Journals (AJL). Then it does not belong to any individual. It was functioning as a newspaper of the Congress party. The magazine closed down in 2008 as its debt burden increased to over Rs 90 crore. In 2010, the number of shareholders shrank to 1057. The loan was given by the Congress party to pay off the debt of AJL and start the newspaper.

After that, an organization called ‘Young India’ was started in the year 2010. Rahul Gandhi and Sonia Gandhi hold 76 percent shares. The remaining 24 percent stake is held by Congress leaders Motilal Vora and Oscar Fernandes.

In 2011, BJP’s Subramanian Swamy filed a lawsuit claiming that Young India paid Rs 50 lakh and acquired shares worth several crores of assets of AJL. As a result, the Enforcement Directorate started a financial fraud investigation against Young India in 2014.

Rahul Gandhi, who is on bail, was recently interrogated by the Enforcement Directorate at length in the case. Congress president Sonia Gandhi was summoned 3 times recently for questioning. Sonia had sought exemption from appearing in previous summons as she was undergoing treatment for corona infection.

In this case, Sonia Gandhi appeared yesterday afternoon at 12.10 for the investigation of the Enforcement Department. He was accompanied by Rahul Gandhi and Priyanka Vadra. In no time, Rahul left the enforcement headquarters. Priyanka was the only one with Sonia’s necessary medicines. A five-member team of enforcement officers, headed by Additional Director Monika Sharma, interrogated Sonia Gandhi. Apparently he was asked 50 questions. It is said that the same questions that were asked to Rahul Gandhi in the 5-day interrogation were also asked to Sonia. After about 3 hours of interrogation, Sonia Gandhi left the Executive Department headquarters. The Enforcement Directorate has asked him to appear again for questioning on Monday (July 25).

Protest across the country: The Congress party alleged that the action by the Enforcement Directorate was an act of political vendetta. Congress leaders protested across the country yesterday to condemn the investigation. The protestors held placards saying ‘Stop Abuse of Enforcement’. The police tried to disperse the Congress workers who had gathered to protest in Delhi with water cannons.

A two-wheeler was burnt during a protest by Congress in Hyderabad. According to reports, a car was also set on fire at another place. Protesters also stopped trains at some places.