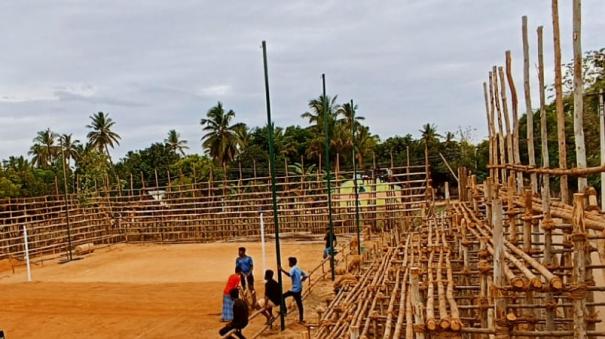 Pudukottai: A national level volleyball tournament will be held for 3 days starting from 8th to 10th in view of the Golden Jubilee of Anna Volleyball Club at Vadagat in Pudukottai district. The tournament will be inaugurated by the State Sports Minister Shiva.V. Meiyanathan.

The gallery is being set up in a total of 4 sections with 8 floors of 100 feet length per section to accommodate around 3,500 people at a time. More than 50 electric lights are being installed in the ground to lighten the darkness. Apart from this, there are parking lots for two and four wheeler vehicles.

The tournament organizers say that the tournament will be held from around 6 pm to 1 am and around 25,000 visitors will come every day. Anna Kaibandu Kazhagam is organizing this as the 50th anniversary of its inception.

The tournament will be inaugurated by the State Environment – Climate Change Department and Youth Welfare and Sports Development Minister Siva V Meiyanathan.

State Law Minister S. Raghupathi, former minister C. Vijayabaskar MLA and others are going to participate in the 3-day event.

The winning team will be given a cash prize and a trophy in memory of the deceased players of Anna Handiball Club. Anna Volleyball Club is doing the preparations for the tournament.