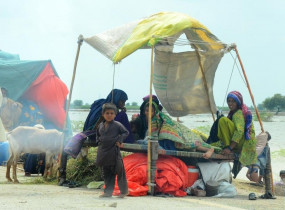 Digital Desk, Geneva. Nearly eight million people are still displaced in Pakistan after last summer’s floods. Water is still standing in some areas. This was stated by the Permanent Representative of Pakistan to the United Nations in Geneva.

Pakistan representative Khaleel Hashmi told a press conference on Thursday that people are in urgent need of housing and the damage caused by the floods has affected agriculture and people’s livelihood, Xinhua news agency reported.

Hashmi was speaking ahead of a high-level climate conference next week. The conference will be attended by Pakistani Prime Minister Shehbaz Sharif and UN Secretary-General Antonio Guterres.

Meanwhile at least 2 million houses were destroyed or damaged, along with nearly 13,000 km of roads, 3,000 km of railway tracks, 439 bridges and 4.4 million acres of agricultural land.

As water is still stagnant in many areas, many people cannot return to their regular livelihoods and therefore depend on humanitarian aid. He also warned that this flood may come in other countries as well.