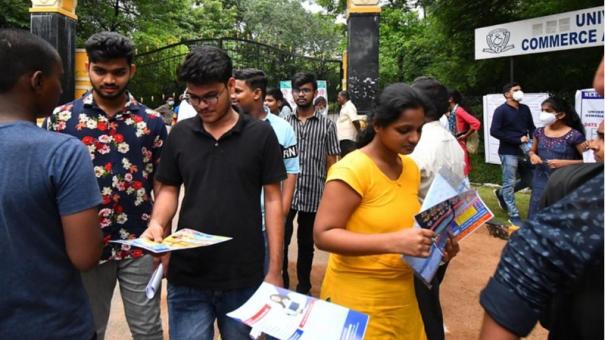 New Delhi: NEET Result for Medical Courses has been published. The exam results were expected to be released yesterday morning (September 7), but after a long wait, they were released last night. In this examination, 4 students including a student from Haryana have secured 99.99 percent marks and have secured the top position. Students’ details of their marks https://neet.nta.nic.in/ , ntaresults.nic.in You can visit the website.

NEET 2022 Undergraduate Exam: Admission to undergraduate medical courses including MBBS, BDS is conducted on the basis of National Eligibility and Entrance Test (NEET). National Examination Agency (NDA) conducts this examination every year. Accordingly, the current year’s NEET examination was held on July 17 in 3,570 centers set up in 497 cities across the country. 17.78 lakh students wrote this examination. Out of this, 9.03 lakh people are eligible for admission in medical course. Of these, 4.47 lakh people belong to the OBC category. 1.31 lakh people belong to scheduled caste, 47,295 belong to tribal class, 84,070 belong to economically backward upper class category and 2.82 lakh belong to general category.

Pass Rate of Tamil Nadu: In Tamil Nadu alone, more than one lakh people appeared for the exam. Out of them, a total of 51.3% (67,787 people) passed. This is less than last year. Last year 54.40% passed. Similarly, only two of the top 50 in terms of marks are from Tamil Nadu. Tridev Vinayaka, a student in Tamil Nadu, has secured 705 marks and topped the list. He is ranked 30th nationally. Tamilnadu student Harini secured 702 marks and stood second. He is ranked 43rd nationally.

The maximum number of 9 people from Karnataka is in the top 50 places. Next, there are 5 people each in Delhi and Telangana. 4 people across the country have secured 99% in this exam. Tanishika of Rajasthan, (Tanishika’s home town Haryana who appeared in Rajasthan) Vats Ashish Patra of Delhi, Hrishikesh’s N. Ganguly and Rucha Bavashea scored 715 out of 720 and topped with 99.99%. Nationally, students from Uttar Pradesh and Maharashtra have cleared the NEET exam the most.

Late Results: The NEET results were expected to be out by the end of August. However, the publication of the results was delayed due to the fact that the work of correcting the answer sheet was not completed as planned. Due to this, the initiation of admissions for undergraduate medical courses across the country has been delayed. The general category counseling for the admission of junior engineering students, which was to be held in Tamil Nadu, has also been postponed. Due to this, demands were made from various quarters to release the NEET results quickly. In this case, the results of the NEET exam were released yesterday (September 7) night. Provisional answer key for NEET examination, OMR answer sheet copies of candidates last Aug. It is noteworthy that it was published on 31st.