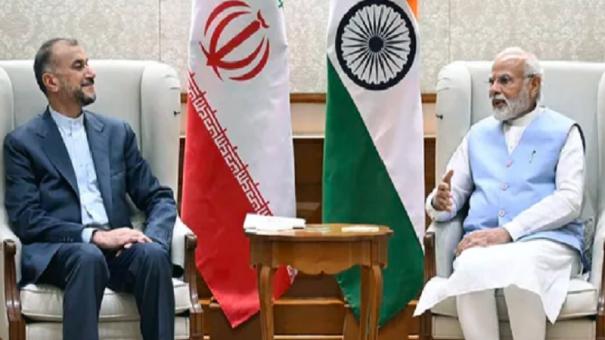 New Delhi: Iranian Foreign Minister Amir Abdolian arrived in India yesterday (Wednesday). Amir Abdolian’s visit to India has gained prominence in the context of the controversial speech of former BJP spokesperson Nupur Sharma, who has been condemned by many Islamic countries in India.

Earlier he was given an enthusiastic welcome on behalf of the Government of India. Amir Abdolian, who met Prime Minister Narendra Modi, discussed bilateral trade relations. Improving trade relations and counter-terrorism were discussed during the meeting. The Iranian Minister also met with Foreign Minister Jaishankar and National Security Adviser Ajit Doval. During a meeting with National Security Adviser Ajit Doval, Mohammed Nabi expressed regret over the insult. He said that there was a negative atmosphere in the bilateral relations due to the insult to the Prophet Muhammad. This was stated in a statement issued by the Iranian Ministry of Foreign Affairs. The report is published in Persian.

Commenting on the meeting with the Emir, Prime Minister Modi posted on his Twitter page, “I am pleased to meet with Iranian Foreign Minister Hussein Amir Abdolian. We discussed enhancing long-standing cultural ties between India and Iran. The two countries have benefited from each other.

Foreign Minister Jaishankar said on his Twitter page, “Extensive consultations were held with Amir Abdolian on various issues including bilateral cooperation, trade, communication and health. We also discussed the Afghanistan and Ukraine issue.”

Amir Abdolian was the first prominent figure to visit India from a West Asian country after the Nupur Sharma controversy was condemned by a number of Islamic countries, including the Islamic Alliance and the GCC. He is touring India for three days. It is also his first visit to India since assuming the post of Foreign Minister of Iran.