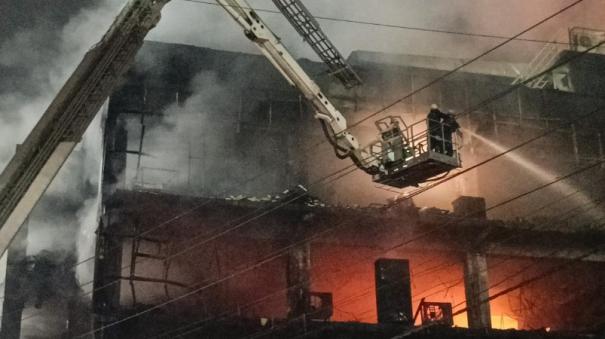 DelhiAt least 27 people have been killed in a fire that broke out in a commercial complex near the Mundak metro station in west Delhi. Many more have been admitted for treatment with injuries.

About 24 firefighters are battling the blaze, which is said to have started at 4.40 pm today. So far 27 bodies have been recovered from the three-storey shopping complex. Fire department officials feared the death toll could rise further as rescue operations have not yet been completed on the entire site of the building.

The fire has not yet been brought under control. Fire trucks and ambulances arrived at the scene and rescue operations are in full swing. About 60-70 people have been rescued from the building and more than 40 have been injured. All of them have been admitted to the hospital for treatment.

Initial reports from the fire department said the fire was from the office of the company that manufactures the CCTV camera and router on the first floor of the building. The incident has caused the greatest tragedy in the region. Expressing his condolences to the victims of the fire, Prime Minister Modi said, “I offer my condolences to the families of the victims and will provide Rs 2 lakh each to the families of the victims.”

Delhi Minister Satyendra Jain visited the site of the fire and expedited the rescue operation.