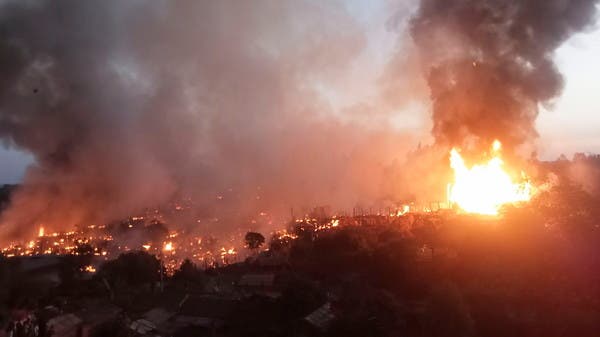 A fire broke out in a Rohingya refugee camp in southern Bangladesh on Sunday, destroying hundreds of homes, officials and witnesses said, although there were no immediate reports of injuries.

From a Rohingya camp in Bangladesh (archive)

The fire broke out in “Camp 16” in Cox’s Bazar, a border area home to more than a million Rohingya refugees, most of whom fled a military-led crackdown in Myanmar in 2017.

Muhammad Shams Al-Duha, a refugee official in the Bangladesh government, said emergency teams were trying to get the fire under control, adding that the cause had not yet been determined.

For his part, Abu Taher, a Rohingya refugee, said: “The fire is still spreading. Pray for us.”

Another fire broke out in a treatment center for Corona patients in another refugee camp in the same area last Sunday, but no injuries were reported.

Bangladesh hosts about 1.2 million Rohingya in refugee camps in Cox’s Bazar, following the crackdown launched by the Myanmar army in August 2017.