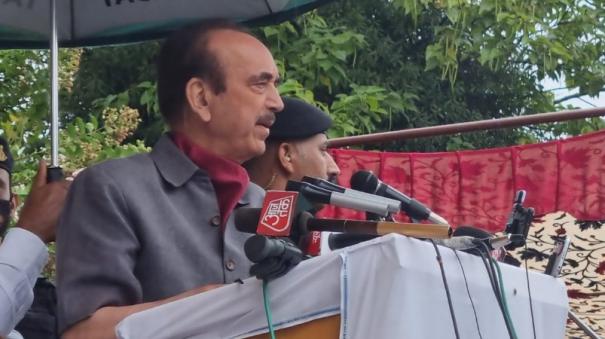 Baramulla: Senior Congress leader Ghulam Nabi Azad has said that he will start a new political party in 10 days.

Senior leader Ghulam Nabi Azad, who resigned from the Congress party on 26th of last month, had announced that he was going to start a new political party. In this context, he addressed a public meeting in the town of Baramulla in the Kashmir valley among his supporters. Elaborate arrangements were made as it was his first public meeting after quitting the Congress. A large number of people from different districts not only Baramulla participated in it. Also, 8 councilors from Abni party resigned from their posts and attended the meeting in support of Ghulam Nabi Azad.

Speaking at the meeting, Ghulam Nabi Azad said that the name of the party will be announced in 10 days.

Earlier, Ghulam Nabi Azad had convened an all-party meeting yesterday. Speaking to reporters after the meeting, he said that representatives from 35 assembly constituencies of Jammu region were present and they expressed their willingness to support the party he is about to launch. He also said that now the support is 4 times more than the support he had when he was in the Congress party.

Ghulam Nabi Azad, who was one of the senior leaders of the Congress party, resigned from the party on 26th of last month. At that time, in a 5-page letter to Sonia Gandhi, it is noted that “You are the leader of the party in name only. All decisions are taken by Rahul Gandhi and his proteges. Senior leaders are not important in the party now. Rahul Gandhi has spoiled the culture of taking decisions with the advice of senior leaders.”