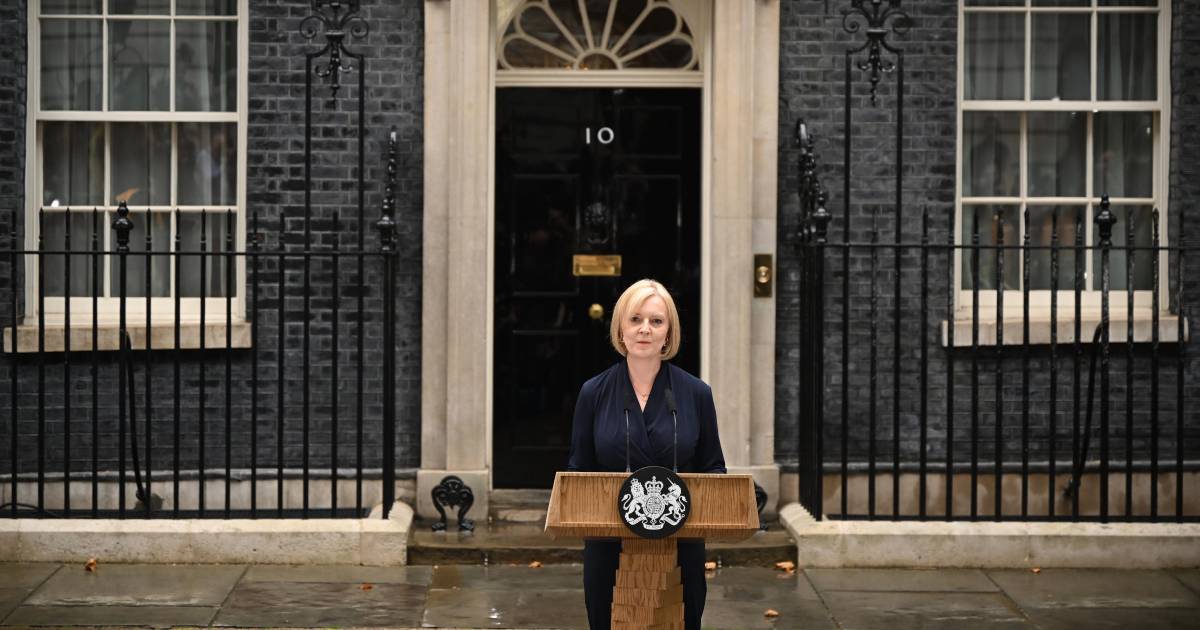 with videoOn the doorstep of her official residence, new British Prime Minister Liz Truss promised in her maiden speech to help the United Kingdom out of the crisis. “I am determined to keep my promises.”

Serious, determined and somewhat rushed, Liz Truss tried to come across as a serious successor to Boris Johnson during her first speech as Prime Minister of the United Kingdom. In her first week, she promised to immediately tackle the energy crisis, reduce taxes and reduce long waiting times in healthcare. “Together we can weather this storm,” she told 10 Downing Street.

Critics immediately pointed to her lack of energy, but Truss should be given some credit given the rather exceptional circumstances. Heavy rainfall threatened to ruin her performance. The rainfall was such that waiting cabinet members rushed inside to keep their suits dry. Just as her escort turned into Parliament Square, the downpour stopped abruptly. But the sky remained ominous.

Flash visit to the Queen

Truss landed on a private jet at RAF Northolt military airport around 4pm UK time. The flight followed a flash visit to Queen Elizabeth at Balmoral Castle in Scotland. The 96-year-old monarch asked her to form a cabinet there, officially making Truss the fifteenth prime minister during her reign. Earlier in the day, Elizabeth accepted Boris Johnson’s resignation.

The Queen’s frail health did not allow an audience at Buckingham Palace. For this reason, the protocol was adapted to accommodate her. Although the content of the conversation in the ‘drawing room‘ of Balmoral Castle remains a secret, the Queen’s advice to Truss guesses. The new prime minister needs all the luck in the world to make the mammoth job a success.

Truss wants to be the first to freeze gas and electricity prices by releasing about 110 billion euros. This radical plan, similar to the financial aid packages during the corona crisis, should help millions of Britons through the winter, keep schools open and save small businesses from ruin. At the same time, she wants to lower taxes to ‘get the country to work’.

Leading economists doubt her fine words. Both plans are pushing the UK into a recession, they say. Inflation, already above 10 percent, could double. And there is no unity within the Conservative Party after a fierce campaign. Johnson remains popular internally and externally. The fact that BoJo alluded to a new run for the highest office in his farewell speech immediately makes Truss vulnerable.

Motion of no confidence at Christmas

Enemies of Truss hinted Tuesday morning that a vote of no confidence around Christmas is a likely scenario in their view. Truss not only has to convince the voter of her qualities, but also many a parliamentarian. In the background, opposition Labor party, lurking at the polls, believes in the chances of beating the Conservative Party in the next election.

The 47-year-old Truss faces many more pitfalls. After initially campaigning to keep the UK in the European Union, she now ranks as an arch supporter of Brexit. As foreign minister, Brussels noticed that she is much more fierce and inflexible than Johnson. In view of the explosive situation in Northern Ireland, this could pose diplomatic problems.

Truss tends to unilaterally change the so-called Northern Ireland Protocol. This jeopardizes the carefully chosen solution to respect the Good Friday Agreement. The British are not interested in this at the moment. To survive, she must reduce energy costs as quickly as possible. Once that hurdle has been overcome, she can give shape to the rest of her political vision.

Her job, like Theresa May’s in 2016, starts with headwinds. Only 170,000 members of the Conservative Party chose both women to succeed a retiring prime minister. Only by-elections can give her a real mandate. Given the shaky state of her party, that is not an option now. Truss lives by the day. That the rain stopped before her speech saved her first 24 hours in that sense. A small boost in ‘global headwinds’, as she described the current climate.

Watch our most watched news videos in the playlist below: