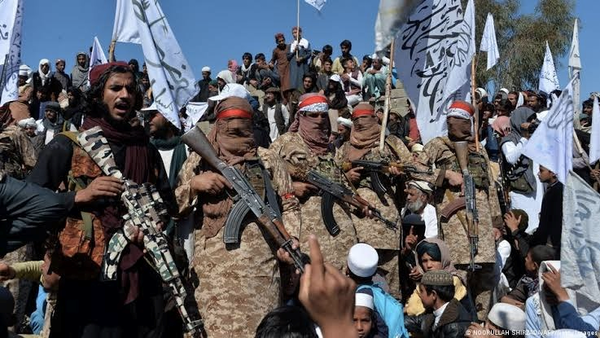 The Taliban movement, which came to power in Afghanistan months ago, does not stop providing more surprises. After it stopped all concerts in the country, many national orchestra players fled, along with many painters, artists, and even football players, and libraries were closed, not to mention the disaster. The biggest thing that was manifested in preventing girls from education, it seems that it is time for drama and television.

The Ministry of the so-called “Promoting Virtue and Prevention of Vice” in the movement’s government called on Afghan television channels to stop broadcasting series featuring women, within the framework of the new “religious instructions” published on Sunday.

No role for women in drama

A document issued by the ministry and directed to the media stated that television channels should avoid showing romantic series in which women play roles.

She also demanded that female journalists wear the headscarf when they appear on the screen, without specifying whether she was talking about just a headscarf, which women originally wear on Afghan screens, or a veil that covers more, according to what was reported by Agence France-Presse.

She also specified for Afghan TV channels what kind of programs she wanted.

A history of repression

This is the second time that the ministry has interfered with the work of Afghan television channels since the Taliban movement took control of power in mid-August.

The movement previously banned television, cinema, and all forms of entertainment as immoral.

The Taliban would publicly punish people who were caught red-handed while watching television and the latter was broken, or in possession of a video device.

While the media sector flourished and dozens of private radio and television channels were established after they were expelled from the government in 2001, these media provided new job opportunities for women who did not have the right to work or learn under the Taliban regime in the nineties.

Fear for the fate of women

It is noteworthy that the movement did not resume lessons for girls in middle and secondary schools, nor in universities in most regions of the country, and in private universities, the movement requested that students be veiled.

It is noteworthy that since the Taliban took power in mid-August, many questions have been drawn about the movement’s orientations with regard to the rights of women and women in the country, especially after it announced in September that it would allow male students and teachers to return to schools only, while female and male teachers remained at home.

Western concerns are increasing over human rights and freedoms in Afghanistan, especially since the Taliban, during their previous rule of the country from 1996-2001, deprived girls and women of the right to education and prevented them from working and traveling.