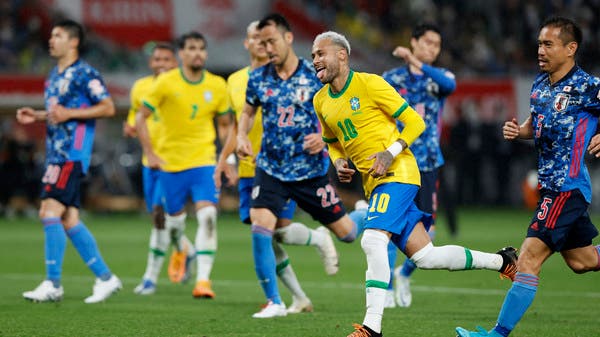 Neymar scored a penalty kick 13 minutes from the end to lead Brazil to a 1-0 victory over Japan at the National Stadium in Tokyo on Monday, leaving the Paris Saint-Germain player just three goals away from equaling the record number of goals for Pele with the national team over all time. ages.

The striker calmly scored the penalty kick to score his 74th goal in 119 international matches, after Japan goalkeeper Shuichi Gonda thwarted several dangerous attempts by Neymar during the meeting, which was held under the rain, with 63,638 spectators attending.

This victory comes after Brazil crushed South Korea 5-1 on Thursday as coach Tite’s team prepares for the 2022 World Cup in Qatar next November.

The visiting team threatened Japan’s goal early and Lucas Paqueta hit the post in the first two minutes after a superb backheel pass from Neymar inside the area.

Fred shot away from a long distance immediately after, while forcing and saving the goalkeeper an attempt at the beginning by Neymar (30 years), but during the substitute Richarlison’s attempt to follow the ball, he was fouled in the area, so the referee awarded a penalty kick.

Neymar sent Gonda in one hand and the ball in the other to score for the ninth time in five matches against Japan and is close to breaking Pele’s record.