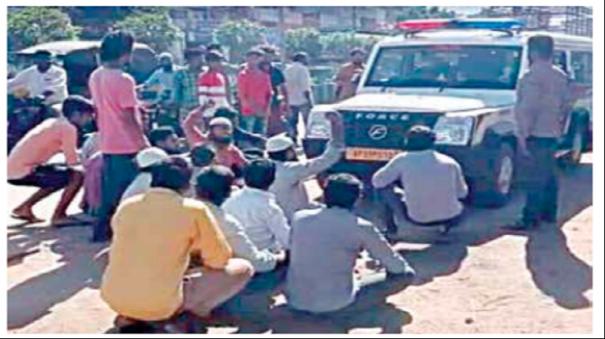 New Delhi: The National Investigation Agency (NIA) officials yesterday conducted raids at 40 places, including the homes and offices of Popular Front of India (PFI) executives from Andhra Pradesh and Telangana. In this regard, 4 people were arrested. Also, important documents and weapons were confiscated.

When Prime Minister Modi participated in the events held in Bihar last July, 3 terrorists were arrested for planning to kill him. Also, a case was registered against 26 people. Investigation revealed that they had close links with the Popular Front of India.

During the interrogation of the arrested persons, many shocking information came out. It has been revealed that youths from Andhra Pradesh, Telangana, Kerala, Tamil Nadu, Uttar Pradesh and West Bengal gathered in Patna last July and planned to kill the Prime Minister and the conspiracy was foiled due to the alert of intelligence agencies.

Meanwhile, the Nizamabad police of Telangana arrested Abdul Qader, Sheikh Shahanullah, Mohammad Imran and Mohammad Abdul Mobin last July. The investigation revealed that Abdul Qader, a karate master, gave weapons training to more than 300 youths in the name of martial arts training. Further, the investigation also revealed that Abdul Ghader had close links with the PFI organization. The NIA is investigating the case of arrest of terrorists in Bihar.

As the Telangana Nizamabad case is similar to the Bihar case, the Union Home Ministry recently approved an investigation by NIA officials. Subsequently, on August 26, the NIA officials registered a separate case regarding the Nizamabad case. In this, 26 people belonging to the BFI organization have been included as enemies.

In connection with this case, the NIA officials yesterday conducted surprise raids at 40 places, including the houses and offices of PFI executives from Andhra Pradesh and Telangana.

In Andhra Pradesh, the raid was conducted in Kurnool, Guntur, Kadapa and Nellore districts. Test run in Hyderabad and Nizamabad districts in Telangana
received A raid was conducted at the house of PFI executive Younus Ahmed in Andhra Pradesh’s Nandyal area
At that time, the people of the area gathered and participated in the protest. They were removed with the help of the local police.

Similarly, when the NIA officials raided the house of Ilyas in Andhra’s Nellore, the local people staged a sit-in protest. The police chased them away. Important documents were seized from Ilyas’ house.

During the raid conducted at the house of BFI executive Shahid in Nizamabad, it is said that cellphone, laptop etc. were seized. He has a close relationship with the already arrested Abdul Qader. Shahid is accused of organizing various weapons training camps.

4 persons were arrested during the raids conducted in Andhra Pradesh and Telangana. The NIA officials have not disclosed the details of who they are. They are being interrogated in a secret place.
Cell phones, computers, important documents and iron weapons of BFI executives were seized during the NIA raid. Cash of Rs.8.31 lakh was also seized.

Commenting on the raid, NIA officials said, “The PFI is training youths to engage in extremism. Efforts are being made to incite hatred and riots in the name of religion. For this, camps are being held at various places on behalf of BFI and weapons training is also being given in the name of karate class.

Also, training has been given on how to incite riots and how to publish comments on social media.

BFI executives were recently arrested for providing arms training to youths in Bihar. Regarding the same issue, we have started an investigation in the southern states. 24 teams raided the houses and offices of BFI executives involved in anti-national activities in Andhra Pradesh and Telangana, and 4 people were arrested. And many people will be trapped.”