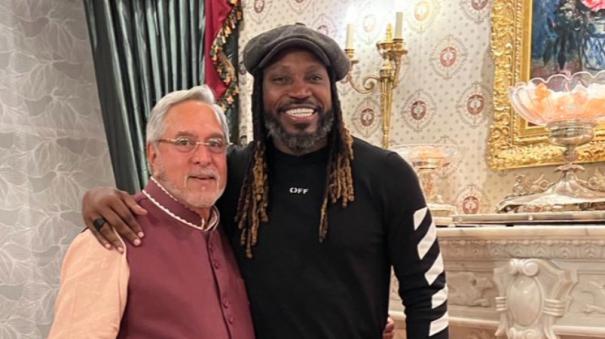 London: Vijay Mallya has shared a picture of himself with cricketer Chris Gayle on his Twitter page. He captioned it “glad to meet a best friend”. Tens of thousands of people have liked this movie. Gail re-tweeted it.

Vijay Mallya is one of the most important businessmen who fled India. He is accused of committing various financial gain crimes in India. The Indian government is trying to deport him from the UK in response. He is the former owner of the Royal Challengers Bangalore team in IPL cricket.

Chris Gayle is a West Indies cricketer who has played cricket in the IPL for Bangalore. Gayle scored 3163 runs in 85 matches for Bangalore. 19 times half a cent and 5 times a cent.

In this case, the two seem to have met recently. Vijay Mallya shared this picture as proof.

“Nice to meet my best friend Christopher Henry Gayle. Universe Boss. I chose him to play for the Bangalore team and our wonderful super friendship has been going on since time immemorial,” Mallya said. It is worth noting that this image has been liked by over 53,000 people.

Great to catch up with my good friend Christopher Henry Gaylehenrygayle, the Universe Boss. Super friendship since I recruited him for RCB. Best acquisition of a player ever. pic.twitter.com/X5Ny9d6n6t