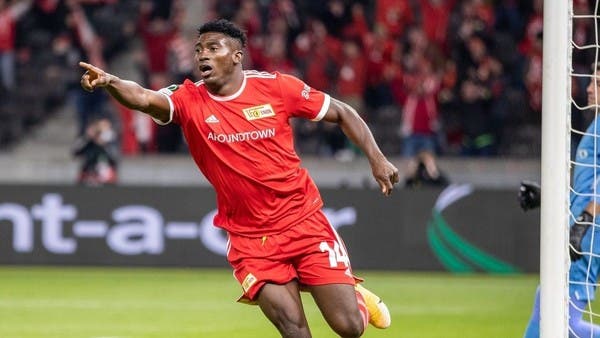 Nottingham Forest, who returned to the English Premier League after a 23-year absence, made a record signing of Nigerian striker Taiwo Owenyi from German Union Berlin, with a deal estimated at 17 million pounds (about 20.85 million dollars) for five years.

The twenty-four-year-old scored 20 goals in 43 matches in various competitions last season, and became the first player to join Forest after his return to the Premier League.

Nottingham Forest lived its golden era under the leadership of its feat coach Brian Claff in the late seventies and early eighties when he was crowned European champions in 1979 and 1980 and England champion in 1978.

Ownyi said: “It was always my dream to play in the Premier League. After speaking with (Nottingham coach) Steve Cooper about our ambition and looking back at Forest, it was the club that I wanted.

After a season on loan, he joined the capital team permanently in July 2021 from Liverpool, who signed him at the beginning of his career in 2015 without carrying his colors. The player spent most of his career on loan in Germany, Belgium and the Netherlands.

Welshman Cuper said his club had been watching Oneni closely for several months: “Other clubs in England and Europe have taken an interest in him, so we are delighted that he has chosen us.”

By scoring 15 goals in 31 Bundesliga matches, Onye was the sixth best scorer in the Bundesliga, contributing to his team’s fifth and thus entering the European League (Europa League) for the first time since the 2002 season.

Since he made his international debut with Nigeria in October, the striker has played four matches and scored a goal against Sudan during the Africa Cup of Nations.

Nottingham is expected to sign goalkeeper Dean Henderson, 25, from Manchester United, and has entered into negotiations to sign French defender Moussa Niakhate, 26, from Mainz.