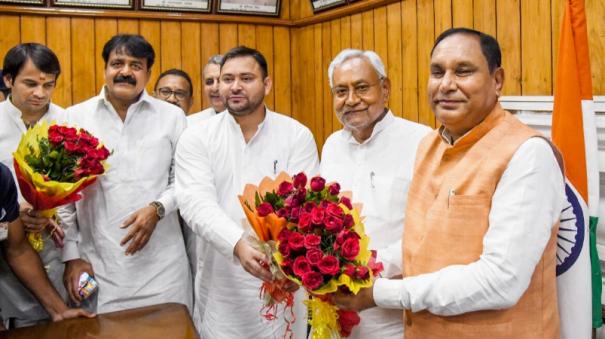 Patna: The Nitish Kumar-led grand coalition government has proved its majority in the Bihar Assembly. Nitish Kumar has won the confidence vote in the Legislative Assembly on Wednesday. The BJP walked out without participating in this trust vote.

Nitish Kumar, who recently broke alliance with the BJP and formed an alliance with the Rashtriya Janata Dal, has once again become the Chief Minister of Bihar. Rashtriya Janata Dal’s Tejashwi Yadav took charge as Deputy Chief Minister. The coalition government has proved its majority in the Legislative Assembly. The vote of confidence was held on Wednesday.

Earlier, the assembly was adjourned till 2 pm. Ahead of the trust vote, Speaker Vijaykumar Sinha resigned from his post after a no-confidence motion was passed on him. The meeting was presided over by Deputy Speaker Maheshwar Hazari.

BJP members walked out without participating in the trust vote. Nitish Kumar won the remaining 160 votes in the poll that followed. The vote was a formality with 164 of the total 243 members of the Bihar Assembly supporting Nitish Kumar.

Speaking during the debate on the no-confidence motion, Bihar MP Talwar Tejaswi Yadav said, “This grand alliance is a historic alliance. Its innings can never be. This will continue for a long time. He informed that no one will run out in between. BJP member Tara Kishore Prasad,
He accused Nitish Kumar of losing his political credibility.

During the debate in the Legislative Assembly, the Deputy Chief Minister and Rashtriya Janata Dal leader Tejashwi Yadav attacked the BJP. He said, “Are you trying to prove that all the property in the country belongs to Tejaswi? Whoever made the railways run at a profit is facing lawsuits. No action was taken against those who sold it. Central intelligence agencies are used to intimidate others. “Through this, if you are friendly with the BJP, you are Harichandran, and if you are not, the Enforcement Directorate and the CBI will be launched against you,” he alleged.