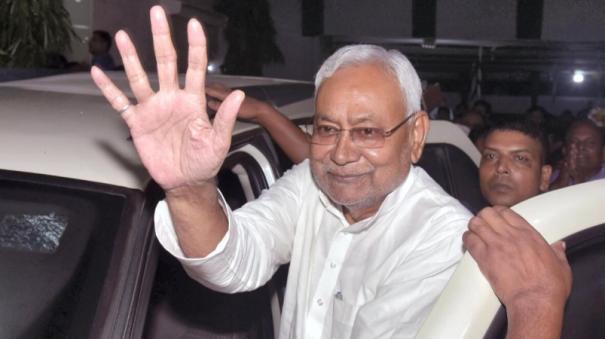 New Delhi: Bihar Chief Minister Nitish Kumar is trying to unite the opposition parties against the ruling BJP at the Centre.

The decision in this regard was taken at the United Janata Dal (JDU) National Executive Committee meeting in Patna which started last Friday. After this meeting, JD(U) party leader and Chief Minister Nitish Kumar is coming to Delhi tomorrow on a 3-day visit.

In Manipur, 5 JTU MLAs joined the ruling BJP. Here JDU got more than 10 percent votes. Currently, the JD(U) party has only one MLA here.

Senior BJP leader Sushilkumar Modi has said that this situation will be created in Bihar as well. In this context, the meeting of JDU has become very important. Nitish Kumar did not insist on presenting himself as the prime ministerial candidate on behalf of the opposition parties.

JDU National President Lallan Singh said, “Our aim is to unite all opposition parties against the BJP. We are not stressing about the prime ministerial candidate of the opposition parties as of now. BJP can buy our MLAs in Manipur. But we cannot shake our support votes there.”

After the defeat in the 2019 Lok Sabha elections, the Congress tried to unite the opposition parties. Next, Trinamool Congress leader and West Bengal Chief Minister Mamata Banerjee joined the project. Meanwhile, Telangana Chief Minister Chandrasekhara Rao also tried. Delhi Chief Minister Arvind Kejriwal is also trying in his own style against the BJP.

In 2014, Nitish Kumar, who had been ruling Bihar with the support of the BJP, left the BJP coalition. In 2014 elections, he quit against Narendra Modi’s nomination as Prime Ministerial candidate. Later, Lalu’s Rashtriya Janata Dal-led mega coalition formed the government in 2015. He rejoined the BJP, but recently left the alliance again.