No electricity, water or heat: Kiev survives thanks to melted snow and old-fashioned village pump 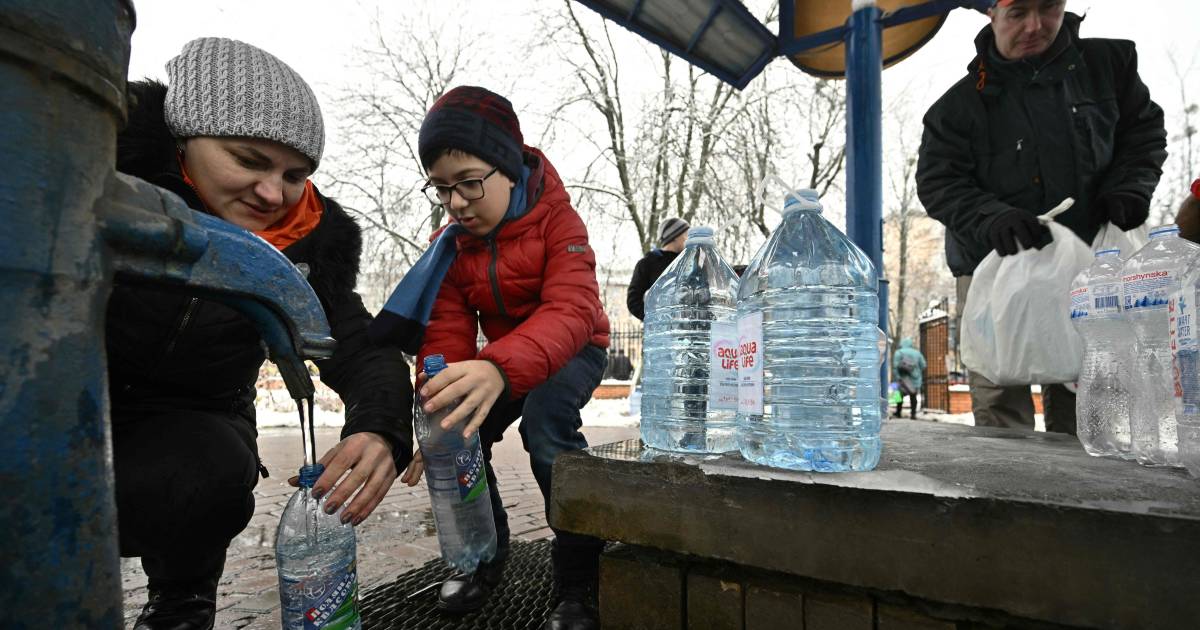 Once again, no water comes out of the tap in Kiev. There is often no electricity, so no internet or electric heating. The district heating is also out. All bombed by the Russians. If this continues, Ukrainians fear a hunger winter. But as crazy as it sounds: luckily snow is falling.

It froze a few degrees in Kiev last night. The cold moved into the homes of the – before the war – three million inhabitants. People are trying to keep the heat of the past few days indoors as much as possible. Windows and doors remain sealed, unless there is no other option.

In the few moments when the internet works, Ukrainians share their stories online. ‘We’ll see how long it takes. We have blankets, sleeping bags and warm clothes,” says Tymofiy Mylovanov, former minister and resident of Kiev.

After yesterday afternoon’s bomb rain, 35 percent of the country lost its internet connection. It is crucial in ordinary urban life in Kiev. Shops work with digital systems. No connection? Then no payment system, and therefore no groceries. Many supermarkets are closing their doors. If it takes a few hours, that’s manageable. But with the continued bombing of critical infrastructure, the interruptions last longer and it becomes more difficult to repair.

In addition, it becomes more difficult to keep in touch with the outside world. There was still some coverage here and there last night, which residents went looking for in complete darkness.

Water is the biggest problem

The biggest problem in Kiev: the broken water supply. Almost the entire city was without it yesterday. As far as is known, it has now only been restored on the left bank of the Dnieper, which means that hundreds of thousands of taps are still dry. Many people are prepared for this and have liters of water in stock.

But that passes quickly. It is necessary, among other things, to wash and flush the toilet. If that does not happen, another risk arises with infectious diseases. That is why the old village pump is in full use again on central squares in Kiev. People are queuing up with plastic bottles and jerry cans. If they have internet, residents of the capital can find a map online with about a hundred of these taps.

Fortunately, winter does not only bring cold and misery. The snow that has been falling for a few days now offers a large supply of water that falls on the balconies for free and for nothing. Let it melt and it is fine to drink. Although collecting it must be done quickly, because here too: the moment you open your balcony door, you lose valuable heat from your home. Photos are also appearing online of people using plastic bottles to collect meltwater from drainpipes.

People can also go to central points for other basic necessities. As of this morning, according to the government, some 3,500 points had already been set up across the country where people gather to warm up, charge their phones and get a hot meal. This concerns schools or office buildings with aggregates. It is gratefully used. “I am in the Metrograd trade center in Kiev center. Found a place with mobile coverage and I could even charge my mobile’, this Xenta says happily.

Ukraine is doing everything it can to restore facilities as quickly as possible. This time it is more difficult because specifically the facilities where the power is generated have been destroyed, says energy company Ukrenergo. This morning, according to local authorities, a quarter of Kiev was still without power.

It is hoped that everyone will be able to reconnect during the day. But that also does not mean that the power supply is back to normal. Due to the devastation of the infrastructure, the country has had to use electricity more economically for some time now. If one area in Ukraine receives power, the other will have to do without for a while. After about three hours, the switch is turned again, as it has been for several weeks.

Then there is the question of how long it will take until the next bombing. Because Russia seems to have a permanent focus on the energy supply. To break the morale of the inhabitants, or to start a massive refugee flow towards Europe and thus destabilize the west.

But that moral seems strong. Despite the deteriorating situation, people are keeping their spirits up. This is also evident from the video below that the Ministry of Defense shared last night. In the dark city, lit only by headlights, music is still playing.