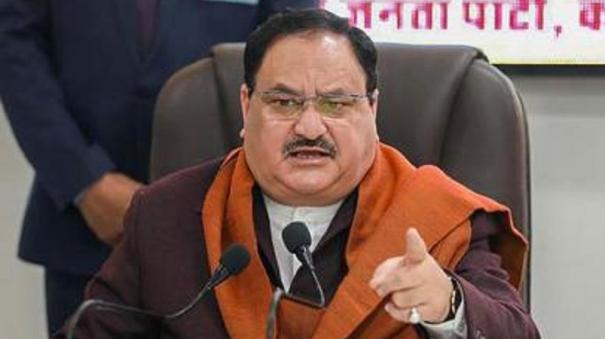 Patna: “Currently BJP is the only national party in India. “Other parties are not strong enough to compete with it,” said BJP National President JP Natta.

Speaking at a two-day meeting of BJP’s national executives, JP Natta said: “The Congress party has become a party of brothers and sisters. State parties such as Lalu Prasad’s RJD in Bihar, Akhilesh Yadav’s Samajwadi Party in Uttar Pradesh, Nationalist Congress and Shiv Sena in Maharashtra, Biju Janata Dal in Odisha, YSR Congress, TRS and family parties in Tamil Nadu have either ended or are coming to an end.

BJP is the only political party and policy based party. All family political parties including brother and sister parties will end politics soon. The Congress party has largely disappeared in all the states of the country. “No national party has the strength to stand against the BJP,” Natta said.

In this two-day meeting of BJP national executives, it was decided that the upcoming 2024 elections will be held under the leadership of Prime Minister Narendra Modi. As far as Bihar is concerned, it has been announced that Nitish Kumar’s Janata Dal will continue in alliance with the 2024 Lok Sabha elections and the next Assembly elections in 2025.