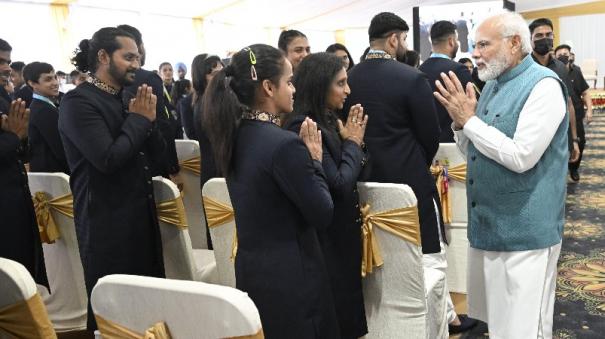 “While all of you were participating in the Birmingham tournament, millions of people in India were awake past midnight watching your every move. “Many people sleep with the alarm set on their clocks to know the match results immediately,” he said.

“Medal count does not fully reflect performance. Compared to the previous Commonwealth series, India found a new way to win this time in 4 new games. From lawn bowls to track and field, our players have excelled. With this activity, the environment for engaging in such new sports will increase tremendously in India. The fact that the first-timers won 31 medals reflects the growing confidence among the youngsters.

Not only by winning the medal, but also by giving us an opportunity to celebrate it and feel proud, you have strengthened the idea of ​​’United Bharat, Great Bharat’. Prime Minister Modi said that you have united the country with consensus and a common goal, which is one of the greatest strengths of our freedom struggle.

“We have a responsibility to create the best, most inclusive, diverse and dynamic sports environment in the world. Prime Minister Modi emphasized to the soldiers that no one with talent should be left behind.