Not against any faction; Illegal buildings are being demolished – UP in Supreme Court Government response 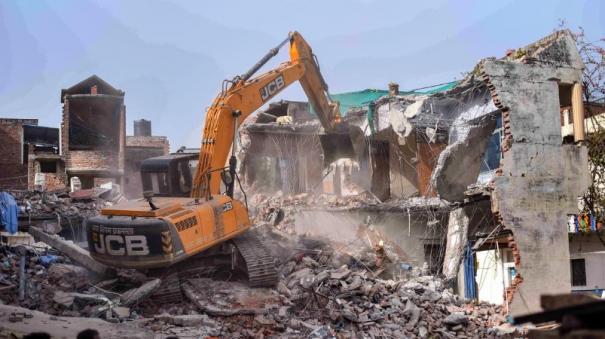 New Delhi: The Uttar Pradesh government has replied in the Supreme Court that the Development Authority officials are demolishing illegally constructed buildings legally and without discrimination.

Protests erupted across the country against the controversial remarks made by BJP spokespersons Nupur Sharma and Naveen Jindal about the Prophet Muhammad. The Jamaat-e-Ulama-e-Hind has filed a lawsuit alleging that government officials were bulldozing houses and buildings built by leaders of protesters in Uttar Pradesh and that the Supreme Court should stop this.

Judges AS Bopanna and Vikram Nath, who commented during the hearing, said, “Building demolition should be subject to the law. It should not be an act of revenge. ” The UP government has also ordered Prayagraj and Kanpur corporation officials to comment on the move.

Accordingly, the 63-page reply filed by the Government of Uttar Pradesh through the Special Secretary to the Home Ministry states:

The Uttar Pradesh government has not taken any extraordinary action. It is common practice for Development Authority officials to demolish illegal buildings. The claim of the Jamaat-e-Ulama Hind organization that this is an act of revenge is completely false.

We reject the Jamaat-e-Ulama’s claim that the removal of occupants under the Urban Planning and Development Act is a punitive measure against a particular sect.

Action is already being taken against those involved in the violence under the Gangs Act, the Prevention of Damage to Public Property Act, the Criminal Procedure Code and the Indian Penal Code.

The demolished buildings in Kanpur were illegally constructed. The operation began long before the riots. In one of the two cases, the proceedings began in August 2020 and in the other in February. In which its owners have admitted to constructing buildings illegally.

The demolition of a house built without permission by Javed Mohammad in Prayagraj started even before the riots. No one affected by the building collapse has approached the Supreme Court. Demolition of illegal buildings is a routine activity. The Uttar Pradesh government has responded.