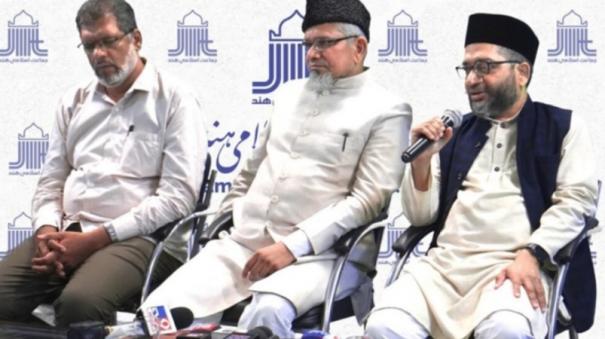 New Delhi: The Supreme Court had said that Nubur Sharma, who had criticized the Prophet of Islam, should apologize to the nation. “There is no need for this apology. Instead, he should be arrested,” asserted the Jamaat-e-Islami Hind (JIH).

JIH is considered as the legendary organization of Muslims. Its head Syed Sadatullah Hussaini and vice-chairman Prof. Engineer Muhammad Saleem held a press conference at its headquarters in New Delhi.

In response to questions from journalists, the duo said: “We support the Supreme Court’s opinion on Nubur Sharma. If the punishment for a wrong is an apology, there is no need for courts and prisons in our country. Nubur Sharma has not been arrested more than a month after he criticized religion in a televised debate.

This move has reduced India’s popularity internationally. The arrest of human rights activists Deesta Seethalwad and former DGP of Gujarat RB Sreekumar is shocking. Journalist Muhammad Zubair was arrested for sharing Nupur’s criticism. This arrest shows the direction in which our country is heading.

Bulldozers demolishing the residences of those who fought against Nupur’s false criticism is totally undemocratic. All politicians, television executives and journalists who incite religious violence should be punished.

The Udaipur incident, in which an elderly Hindu was killed due to mistaken identity in Madhya Pradesh’s Ratlam, was the result of their religiously violent speeches. It is important to legislate to punish those who blaspheme various religious beliefs. Two different actions are unacceptable according to religion among the instigators of religious violence.