Nuclear talks resume in Vienna after a gap of five months 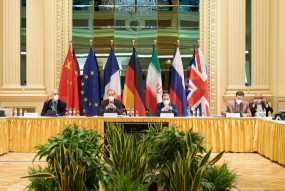 Digital Desk, Tehran. A new round of talks has begun in Vienna on the resumption of the 2015 nuclear deal between Iran and world powers after a 150-day hiatus. This information has been given by Iran’s official news agency.

Ulyanov tweeted after the meeting, “The two sides had a frank, practical and constructive exchange of ideas to reach consensus on the earlier issues.” Bagheri Kani also met with Enrique Mora, the EU’s chief coordinator for the Iran nuclear talks, and Peter Lonsky-Tiefenthal, Secretary-General of the Austrian Foreign Ministry.

Iran signed a nuclear deal with world powers in July 2015, under which Iran was to curb its nuclear program in exchange for lifting sanctions. However, former US President Donald Trump broke the agreement. Talks to renegotiate the deal began in April 2021 in the Austrian capital, Vienna, but were postponed in March this year due to political differences between Tehran and Washington.