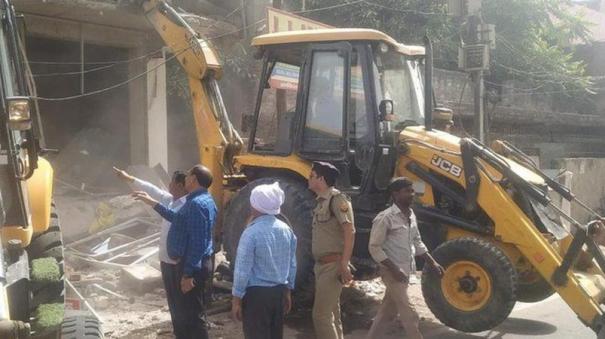 Saharanpur: The state government has taken the latest ‘bulldozer’ action to quell riots in Uttar Pradesh as protests and violence erupt in many parts of the country in the wake of the Nupur Sharma controversy.

To curb the violence, buildings in two cities in Uttar Pradesh, Kanpur and Saharanpur, are being bulldozed. Riots have been raging in Saharanpur since yesterday. Municipal Corporation officials have bulldozed the homes of both Muzammil and Abdul Waqeer, which are thought to be the cause of the violence.

Saharanpur SSP Akash Tomar, while commenting on the bulldozer operation, warned that “both the houses have been demolished as they were found to be illegal constructions. Similar action will be taken if any other illegal occupations are detected”.

Similar action has been taken in Kanpur. Violence erupted in the Begunganj area of ​​Kanpur after Friday prayers. District officials bulldozed a building owned by businessman Mohammad Ishtiaq, who is said to be the mastermind of the violence. Similarly, the Yogi Adityanath government has taken up bulldozer operations in Uttar Pradesh, such as Hadras, Prayagraj, Moradabad, Ferozabad and Ambedkar Nagar. In addition, 237 people have been arrested in connection with the riots.

Many Muslim countries have condemned India for the controversial remarks made by former BJP spokesperson Nupur Sharma about the Prophet Muhammad during a televised debate last month. Information was spread through social media in the Gulf countries that Indian products should be rejected. Subsequently, the Central Government replied that Nupur Sharma’s opinion was not that of the Government of India.

Following this, the BJP suspended Nupur Sharma and expelled Naveen Jindal from the party. The BJP also advised party leaders to act responsibly when expressing their views in public.

Against this backdrop, Islamists in Delhi, Uttar Pradesh, West Bengal, Gujarat and Jharkhand began protesting against Nupur Sharma’s remarks and urging an end to empty talk. A total of 144 restraining orders have been issued in tense areas, especially in Jharkhand and West Bengal.

The Uttarakhand government has set up a special inquiry commission to probe the incident. Meanwhile, curfew has been imposed in several places, including Ranchi.

What does the Union Home Ministry do?

The Union Home Ministry has said it is monitoring the violence across the country amid mounting protests, including the arrest of Nupur Sharma. It also said it was advising state governments on how to contain the unrest.

In addition, the Union Home Ministry has directed the police to provide adequate security. This information has been confirmed by a senior Home Ministry official to ‘The Hindu’ (English) daily.

Meanwhile, Union Home Minister Amit Shah is on a three-day visit to Gujarat. Amit Shah is expected to attend a consultative meeting on Gujarat’s Assembly elections this year.