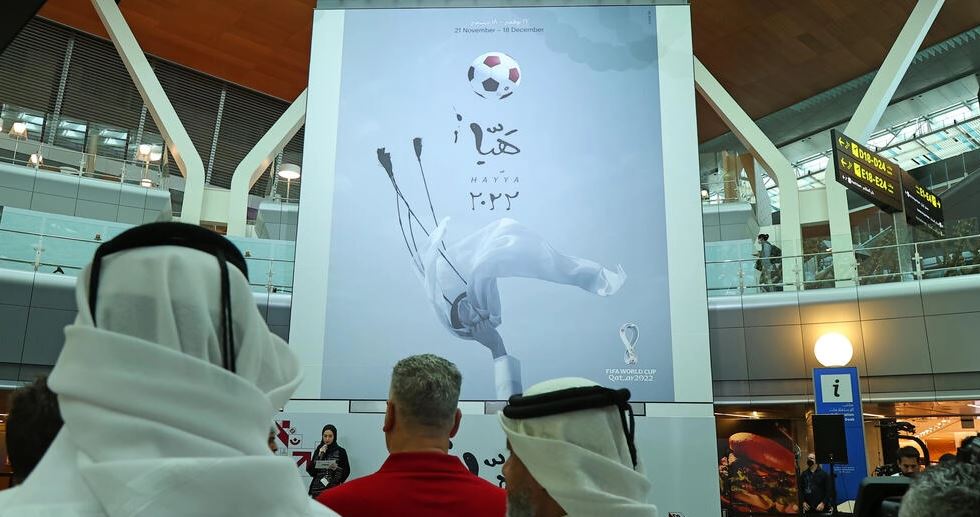 Qatar revealed today the official poster for the 2022 FIFA World Cup, which it will host at the end of this year for the first time in the Middle East.
Hamad International Airport hosted a special ceremony to announce the poster, which was designed by Qatari artist Buthaina Al Muftah, and reflects the country’s culture and heritage and the Qataris’ passion for the most popular game in the world.

According to a statement by FIFA, “For the first time in the history of the World Cup, this edition of the tournament witnesses the creation of a set of official posters that will enhance the atmosphere of enthusiasm and excitement among fans towards the upcoming tournament, which will be held from November 21 to December 18.” The main poster of the tournament highlights the celebration of football and its widespread popularity across the Arab world, by depicting two components of the traditional head covering for men in Qatar and the region, the ghutra and the iqal, waving in the air with the word “Haya”. While the main poster depicts the ghutra and the iqal, the other seven posters reflect the excitement and excitement associated with the game.

Al-Muftah said, “I was inspired by the idea of ​​the posters from the collective memory of the people of Qatar. The majority of my works focus on experiences and memories of the past, and try to link them to the present, and document the Qatari folk heritage in a modern way. I wanted to present posters that come in the same context, and tell the story of Qatar’s culture and authentic heritage through art and football. “.

She added, “I made sure that each poster reflects the celebration of football in Qatar, as the main poster comes in the form of a ghutra and a headband waving in the air in a festive scene, which is what fans used to do in rejoicing when their team scored goals against the opponent.”

For his part, Khaled Al-Mawlawi, Deputy Director General for Marketing, Communications and Tournament Experience, at the Supreme Committee for Delivery & Legacy, said: “Many features of the 2022 World Cup reflect the components of the traditional head covering in Qatar and the region, including the design of the Al Thumama World Cup Stadium, the tournament logo, and the official amulet + Laib. +, and now the official poster. We are very proud of the strong presence of symbols from our culture and rich heritage in all aspects of the tournament.”