Officially .. Real Madrid is the “king” of the Spanish League and Ancelotti embraces history (photos) 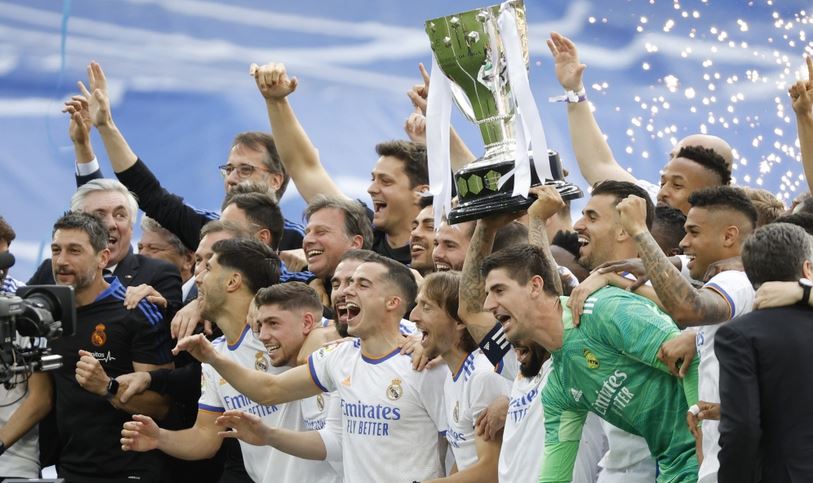 Real Madrid achieved its thirty-fifth title in the Spanish Football League by winning Saturday 4-0 its guest Espanyol in the thirty-fourth stage, to enter the Italian Carlo Anceloni history as the only coach to win the title of the five major European championships.
The Brazilian Rodrigo scored twice (33 and 43), Asensio (55) and the brilliant French substitute Karim Benzema (81) scored the goals of the match.
And four games before the end of the season, no team is able to catch up with the royal club, which raised its score to 81 points, and is now 18 away from Barcelona, ​​who can only reduce the difference to 15 points on Sunday.
Real Madrid regained the title that it lost last year to its neighbor Atletico, after it achieved it in 2020, led by its French coach Zinedine Zidane.

Real Madrid became the first team to win the title four stages before the end of the season since 1990, when it achieved this achievement.
The capital’s team entered the match at the “Santiago Bernabeu” stadium and needed a draw only to decide the title regardless of the results of other matches, and it is 15 points away from Seville II and 18 from Barcelona, ​​which plays on Sunday with Real Mallorca.
Ancelotti previously won the Italian league title with Milan (2004), the Englishman with Chelsea (2010), the French with Paris Saint-Germain (2013) and the German with Bayern Munich (2017).
Despite the euphoria of victory, Real Madrid will not be late to shift its focus to the Champions League on Wednesday for the highly anticipated semi-final second leg match against Manchester City after its dramatic 4-3 loss in England on Tuesday.
For this reason, Ancelotti rested many of his stars, most notably Benzema and Brazilian Vinicius Junior, who scored two goals and a goal against City, respectively, and German midfielder Toni Kroos, who all entered the second half. The Austrian defender David Alaba was also absent due to injury and the Brazilian Eder Militao was suspended, while the latter’s citizen Casemiro, midfielder, occupied this position.
Real Madrid took revenge on Espanyol, who beat them 2-1 in the eighth stage.