OMG: The groom fell asleep on the stage of Varmala in his own wedding, VIDEO went viral on social media 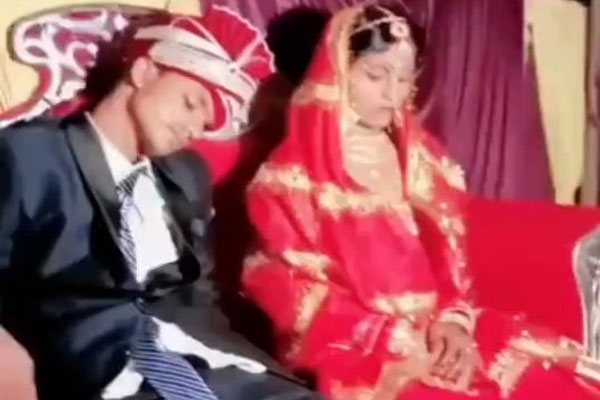 
We all know that there is no dearth of drama and comedy in weddings in our country. Let us tell you that one such funny video is going viral on the internet these days. In the video, the groom Jaymala fell asleep on the stage itself. The baratis are trying to wake him up, but the groom does not budge due to sleep. Seeing this, people can’t stop laughing.

Sometimes the bride and groom get so tired due to the long-lasting wedding rituals that their condition only worsens. One such video of a tired groom is going viral on social media these days, in which the groom fell asleep while posing on the stage of his garland. The people present there try to wake him up. Even after awakening the people, the groom does not wake up and he continues to sleep deeply like Kumbhakarna.

The wedding video of a man named Niranjan Mohapatra has gone viral on the Instagram reels. The interesting thing is that in the midst of so much noise and uproar, the groom is sleeping happily on the stage. The innocent bride keeps watching all this sitting quietly with him. People are trying to know the reason behind the groom’s sleep. At the same time, some people are feeling sorry for the beautiful bride.

Web Title-OMG: The groom fell asleep on the stage of Varmala in his own wedding, VIDEO went viral on social media

Pedro Suárez Vértiz is awarded as an artist of the bicentennial: “What an honor”

Attempt to endanger the Imam of the Makkah Mosque; The young man was caught

USA: Shooting kills 10, including a policeman

“Have you prepared the bags?” … Questions trickle down on Saudi Airlines