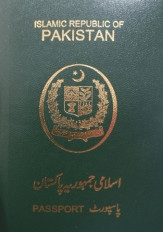 Digital Desk, New Delhi. Bad news for Pakistan, which spews venom against India and harbors terror. Pakistan has once again been included in the list of the worst countries in terms of passports. Pakistan’s passport has been declared the world’s fourth worst passport in the Henley Passport Index.

The Henley Passport Index, which is a ranking of all passports in the world, ranked Pakistan 108th by the number of destinations their holders can reach without a prior visa, reports The News International. Henley & Partners firm’s Henley Passport Index has been regularly monitoring the world’s most travel-friendly passports since 2006.

Japan and Singapore have been ranked first among 192 countries in the Henley Passport Index-2022 report and Japan and Singapore passport holders can travel to 192 countries visa-free. It has 166 more destinations than Afghan nationals, who 199 passports are at the bottom of the index and Afghan citizens can access only 26 countries without the need for an advance visa.

European Union countries continue to top the list as usual and France, the Netherlands and Sweden have moved up a place to join Austria and Denmark in fourth place. People from these countries can visit 188 countries visa free. Ireland and Portugal rank fifth in the index. At the same time, the United States and the United Kingdom, which together held the top spot in 2014, have dropped their rankings and are ranked sixth in the rankings for the year 2022.

India’s passport power has improved in the first quarter of 2022 as compared to 2021. It is now ranked 83rd on the Henley Passport Index, up from 90th last year. However, in 2020 the rank of Indian passport was pegged at 84, while in 2016 India was ranked 85th along with Mali and Uzbekistan.

Corona cases in Singapore increased to more than 313,772