Only 6 players score Sharjah’s goals in the league.. Al-Casir and Caio lead them 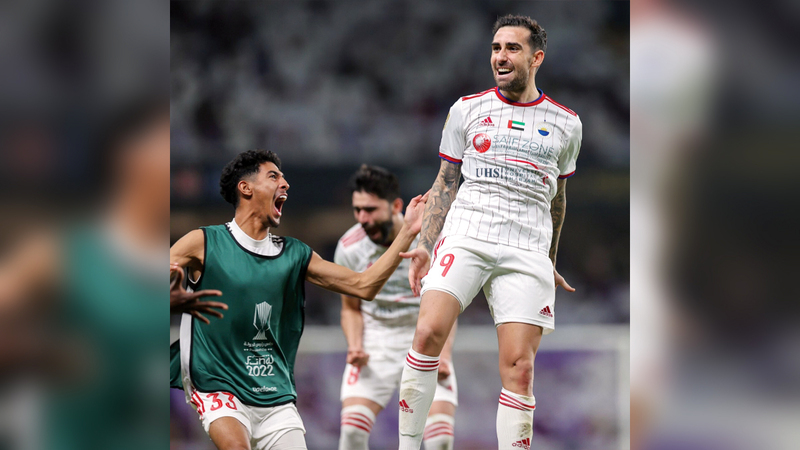 An official statistic monitored by «Emirates Today» from the official website of the Professional League revealed that Sharjah, which returned to the top of the ADNOC Professional League standings with 26 points, surpassing Al-Ahly youth by one point, is the least of the competition teams to receive goals in its own goal after the end of round 12, as it conceded its net Nine goals, surpassing all teams in the tournament, followed by Ajman, who conceded 10 goals.

Sharjah, along with Al Jazira, ranks third in terms of the most goal-scoring teams (24 goals) for each, while Al-Ain, which ranks seventh in the league teams ranking, tops the list of the most goals-scoring teams against its competitors with 27 goals, and Al-Wehda comes second with 25 goals.

Al Dhafra, which is at the bottom of the standings, is the team that has conceded the most goals in the league so far, with 36 goals, compared to scoring only 12 goals against its competitors.

Six players top the list of Sharjah scorers, who have scored the team’s goals in the league so far, led by Spanish striker Paco Alcacer, who participated with the team in 10 matches with six goals, followed by Brazilian Caio Lucas and his compatriot Luan Pirier with five goals each, and three goals. For Bosnian Miralem Pjanic and Guinean Osman Camara, and a goal for Khaled Al-Dhanhani.

Sharjah played 12 matches in the league, winning eight, drawing two matches, and losing the same to Al Wasl in the sixth round and Al Wahda in the eighth round.

Sharjah managed to return to the top of the league, after it was in third place until the end of round 11.

Sharjah is awaiting great confrontations against Al-Nasr in the 13th round of the league, while the team’s strongest matches will be in the second round against Al-Ahly Youth, Al-Jazira, Al-Wasl, Al-Wahda and Al-Ain teams.

Al-Cacer striker began to snatch the spotlight from the Brazilian Caio Lucas, who in turn is considered one of the most important winning cards in the ranks of Sharjah, and the Romanian coach Cosmin relies on him to make the difference in the team, along with Luan Pereira, who in turn presented an advanced level in the recent period and took his place among the main elements in the squad. The team, in addition to Osman Kamara, who began to regain his position.

Al-Kasir succeeded in leading Sharjah to win the first title of the season, the title of the President’s Cup, after he managed to score the only winning goal in the final match against Al-Wahda during the match that brought them together last October.

On the other hand, the Senegalese striker Makita Diop, who moved to the team last October, has not yet appeared at the technical level that he was known for in the UAE League during the past years, as his balance in the league has so far remained devoid of any goal against Sharjah’s competitors, although he He was known for his friendship with the net.

Although Sharjah attracted great players this season in deals that represented the talk of the local and international media, after the trio included Paco Alcacer from the Spanish club Villarreal, Miralem Pjanic from the Spanish club Barcelona, ​​​​and the Greek Kostas Manolas from the Greek club Olympiacos, but he has not yet presented. The convincing technical level, although it continued to outperform its competitors, the coach of the team, Roman Cosmin, confirmed after the team’s last match against Dibba in the press conference that the most important thing in the match was the three points, but there were many things that were not positive, and that the team lacked the focus factor. And he almost paid for it.