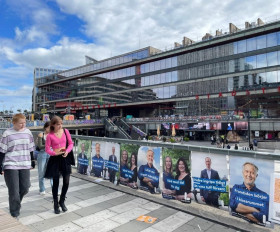 The top three largest parties are the Social Democratic Party, the Sweden Democrats and the Moderate Party, with 30.5, 20.7 and 19 percent respectively. With 92 percent of the votes counted, the Blue Bloc gathered 176 parliamentary seats against 173 for the Red Bloc, leaving the election results at a knife-edge.

The Swedish parliament has 349 seats and votes cast outside the country will be counted later this week. Swedish television political commentator Mats Knutsson was quoted as saying, “As far as the government issue is concerned, there is still a long way to go to reach a conclusion.”

Preliminary data also showed that 81.3 per cent voters participated in the current parliamentary elections, which is almost 5 per cent less than the previous elections in 2018. The energy crisis, immigration and social security are the three major issues Sweden’s 77.7 million legal voters were most concerned about in this election.