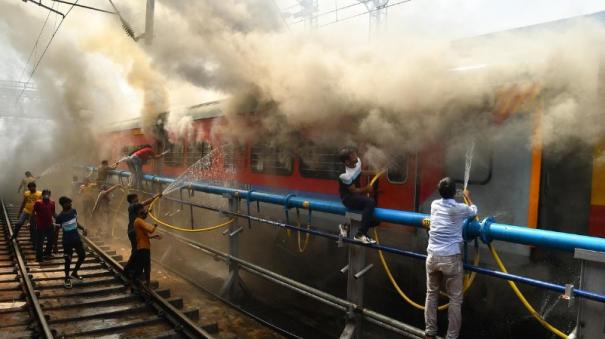 HyderabadProtesters set fire to a train parked at the Secunderabad railway station in Telangana yesterday. A young man was killed in the shooting. A total of 12 trains were also torched across the country, including Bihar. The strike affected about 300 trains nationwide.

On the 13th, Union Defense Minister Rajnath Singh launched the ‘Agni Path’ scheme, which will employ people between the ages of 17.5 and 21 in the Army, Navy and Air Force on a four-year contract basis.

In this situation, there was strong opposition to this project on the part of the youth. Especially in Bihar, a large number of young people who have been trained to join the army are fighting.

In this situation, the protest against the Agnipathai project continued for the 3rd day yesterday. Young people were involved in violence in many parts of Bihar. Protesters set fire to 3 more trains during the protest. The protesters set fire to the Jammu Tawi-Kaugati Express, the Sambarg Grandi Express and the train parked at the Kukadia railway station. 20 boxes in those 3 trains were destroyed by fire.

More than 300 train services across the country were affected by the strike. As a result, more than 2,000 people arrived in front of the Secunderabad railway station in Telangana at 9 am yesterday. Little by little the crowd began to gather in front of the train station in large numbers. They went on a rampage, claiming that they had been eligible to join the army for the past three years, and that they were struggling to join the work because the written test had not yet taken place, and thus opposed the Agni Path project.

They went into the train station and threw away the items that were in the shops on the platforms. They went to the railway parcel service place, took the goods there, threw them on the tracks and chanted slogans against the central government.

Then the academic incident intensified. Following this, the police threw tear gas and dispersed the protesters.

At that time, some people set fire to the East Coast Express train that was standing there. Thus, the police opened fire to deal with the situation. The deceased was identified as Rakesh, a youth from Dabirpeta area of ​​Warangal district. Another 7 people were seriously injured. All of them have been admitted to Gandhi Government Hospital and are receiving treatment. The fire placed on the train damaged 4 compartments.

Following this, the police arrested some of the demonstrators. However, the protesters did not disperse. They sat at the Secunderabad railway station and chanted slogans against the central government, with whom the railway department and army officials held talks. The South Central Railway has announced the cancellation of 57 trains due to the Secunderabad incident and the cancellation of four trains, namely Hyderabad-Shalimar, Ahmednagar-Secunderabad and Secunderabad-Ahmednagar, yesterday. The Shirdi-Sai Nagar and Bhubaneswar-Mumbai trains have been diverted.

The North Central Railway Department has also announced the suspension of 8 trains and the complete cancellation of 2 trains due to the Secunderabad incident. Protesters set fire to 12 trains across the country yesterday alone.

Union Railway Minister Aswini Vaishnav has appealed to protesters against the fire project to refrain from violence and not to damage railway property.