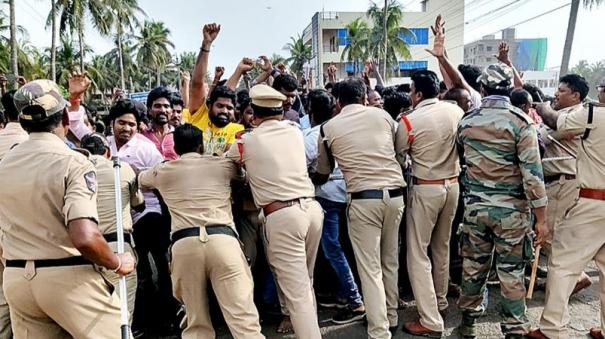 AmalapuramProtesters set fire to the houses of ministers and MLAs in Andhra Pradesh’s Konaseema district in protest of Ambedkar’s name-calling.

While there were 13 districts in Andhra Pradesh, the last 2 months were divided into 26 districts on the basis of Lok Sabha constituencies. As a part of this a new district was formed under the name of Konaseema. Amalapuram was declared the district capital.

2 months later Dr. P.R. It was announced that the government was considering naming Ambedkar as Konaseema district. People were given time to express their views in this regard.

Thus, a sudden revolution broke out in Amalapuram, which was known as the most peaceful district. Locals and the opposition objected to the naming of Ambedkar. Gradually, it was painted politically and turned into a struggle. The day before yesterday, some organizations marched to the Amalapuram District Collector’s Office to file a petition in this regard. Their argument is that Ambedkar’s name should not be mentioned. Heavy police security arrangements were made for this.

But suddenly the protest turned into a battlefield. Protesters chanted slogans against the government. Thus, the police chased and beat them. During this time protesters hurled stones at police. Following this, the police fired 5 rounds of firing and dispersed the crowd.

Amalapuram police have registered a case against about 130 people in this regard. Of these, 46 were arrested. 10 teams are involved in the search for others. Currently, 144 restraining orders have been issued across the Konaseema district.

Janasena leader and actor Pawan Kalyan has said that such violence would not have taken place if Ambedkar had mentioned his name while dividing the district. Telugu Desam Party leader Chandrababu Naidu has said that this was a deliberate act of incitement and that the negligence of the police was the cause of the violence.