Overnight eviction of 50,000 people encroaching on railway land in Uttarakhand is not humanitarian: Supreme Court 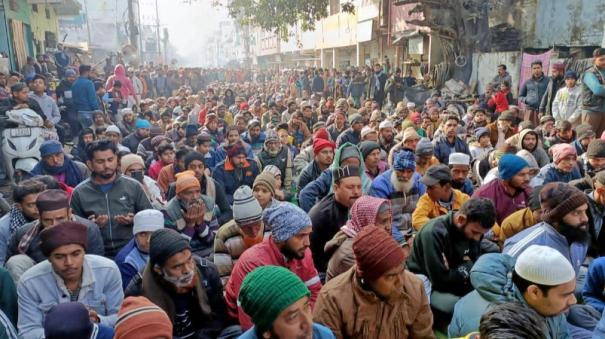 New Delhi: On December 20, the Uttarakhand High Court issued an order on December 20 that the public had encroached on 29 acres of railway-owned land at Haldwani in the state of Uttarakhand and that they should be evicted from there by January 9. However, the Supreme Court has banned this order yesterday.

4,335 families have been living in Kapur Basti, Tholak Basti, Indira Nagar, Panbulpura in Haldwani Nagar in Uttarakhand for many years. A total of 50 thousand people live there.

But it is said that this land belongs to the railways and people have built their houses here occupying 29 acres of railway land. In this case, a case was filed in the Uttarakhand High Court in 2013 to remove the encroachments in the area.

On December 20, the High Court gave its verdict in this case. It said that by January 9, 2023, the occupants of the railway land should be evicted from the area and may be removed using paramilitary forces. This verdict caused great uproar among the people of the area. People protested against this verdict. An appeal was filed in the Supreme Court on behalf of the people seeking to stay the judgment of the High Court.

The appeal came up for hearing before a bench of Supreme Court judges yesterday. “50 thousand people cannot be removed overnight. It is a humanitarian matter. It is not right to say that the paramilitary force should be used to eliminate the people. A practical solution should be developed in this matter,” the Supreme Court bench said, blocking the High Court verdict. The next hearing of the case has been adjourned to February 7.