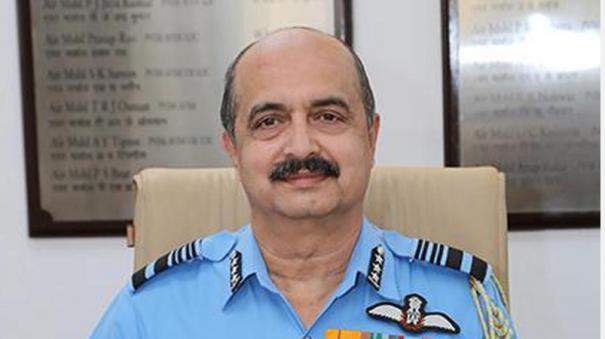 New Delhi: “If there is a threat from China or Pakistan on the western and northern regional borders of the country, the Indian Air Force will be able to respond appropriately in the shortest possible time,” Air Chief Marshal VR Chaudhry assured.

Indian Air Force Commander-in-Chief VR Chaudhary told PTI: “There are some challenges in the western and northern border areas of our country. These challenges persist due to the lack of boundary definition. If there is a two-pronged threat from Pakistan and China, we need to be prepared to deal with it. If such a situation arises, the Indian Air Force will be able to retaliate in a short time and in a timely manner.

India can be attacked at all levels, including the mobilization of troops, the augmentation of structures, and the manipulation of information. All sorts of actions could take place that could pose a threat to Indian security in the future. Therefore, the Air Force is ready for all kinds of opportunities.

The question arises as to whether Russia’s war on Ukraine will not encourage China’s invasion of India’s Line of Control (LoC). However, India continues to monitor and study the border issue. The race needs to see the immediate threat and future threat to our security as a nation. If such a race is found we can retaliate by developing the necessary skills.

Even if China concentrates its forces in the LAC area of ​​Ladakh, the Indian Air Force will be able to retaliate immediately. Plans related to Indian military operations, skills, technological advancement, intensive training, etc. can co-ordinate bilateral threats from both Pakistan and China. Any threat can be countered by concentrating troops on the borders in a short period of time, planning quickly, and taking action. We are constantly monitoring to take all necessary steps to protect national sovereignty no matter what happens. Our military has retaliated whenever there is an encroachment on the border.

The infrastructure of our security forces has been significantly improved to ensure the security of the country. Very happy when you see it. In particular, Chinook helicopters and Rafale fighter jets have already joined the Air Force. They are always ready at the borders.

Sophisticated aircraft like this can retaliate for any encroachment on the western and northern borders. It is not possible to say in full detail how much troops are concentrated on the borders. But it is safe to say that the Air Force was able to retaliate in the short term.