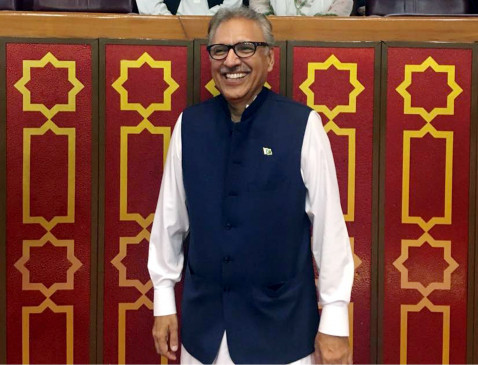 Digital Desk, New Delhi. Fingers are being pointed at Pakistan’s President Dr. Arif Alvi for abusing his office for his personal interests, who used his official position to benefit his family business and on Twitter for his son to bring in foreign investment. Congratulations to him and wish him success.

The son of the President of Pakistan, Dr. Awab Alvi recently took to Twitter to announce that his family business, Alvi Dental, has signed a Memorandum of Understanding (MoU) with Bringing Smiles USA, Geo News reported. Alvi wrote that under the agreement, the two companies are opening a range of dental practices to facilitate affordable dental care in Pakistan. The matter has been widely discussed on social media in Pakistan after a photograph of the MoU was signed, in which the President is visible. Questions are being raised about the President of Pakistan using his official position to benefit his family business while others argued that it was only a family obligation.

Alvi Dental is a private dental business run by the President’s son. From where Dr. Arif Alvi resigned after being appointed as the President in 2018. Although the practice’s website still lists the President as a dentist and part of our team, it even offers the option to schedule an appointment. According to Geo News, a senior lawyer from Karachi, on the condition of anonymity, said that this is a gross violation of the basic principles of conflict of interest. Also the use of the Governor’s House and the President’s presence is an illegal use of state resources and an offense under the National Accountability Bureau Ordinance, 1999, section 9(a)(4).

It is also a violation of the President’s oath which states that I will not allow my personal interests to affect my official conduct or my official decisions. Asad Rahim Khan, a lawyer from Lahore, said the ceremony involved a private business but was marked with the seal of the Federation and the President in attendance. Pakistan has a history that since Field Marshal Ayub, family members have benefited from their proximity to the presidency. As a person opposed to that regime, Alvi is well aware of this trend and promised to fight it. According to Geo News, he should clarify that this is not a clear conflict of interest.

Heera Jalil, a lawyer based in Lahore, said since he is the son of the President and not the President himself. who are entering into a memorandum of understanding. This cannot strictly be called a conflict of interest. The fact that the President chose to officially publicize the event on Twitter and that it took place in the House of Governors reflects poor judgment, if not illegal. Alternatively, it would have been better for the President to distance himself from the deal.